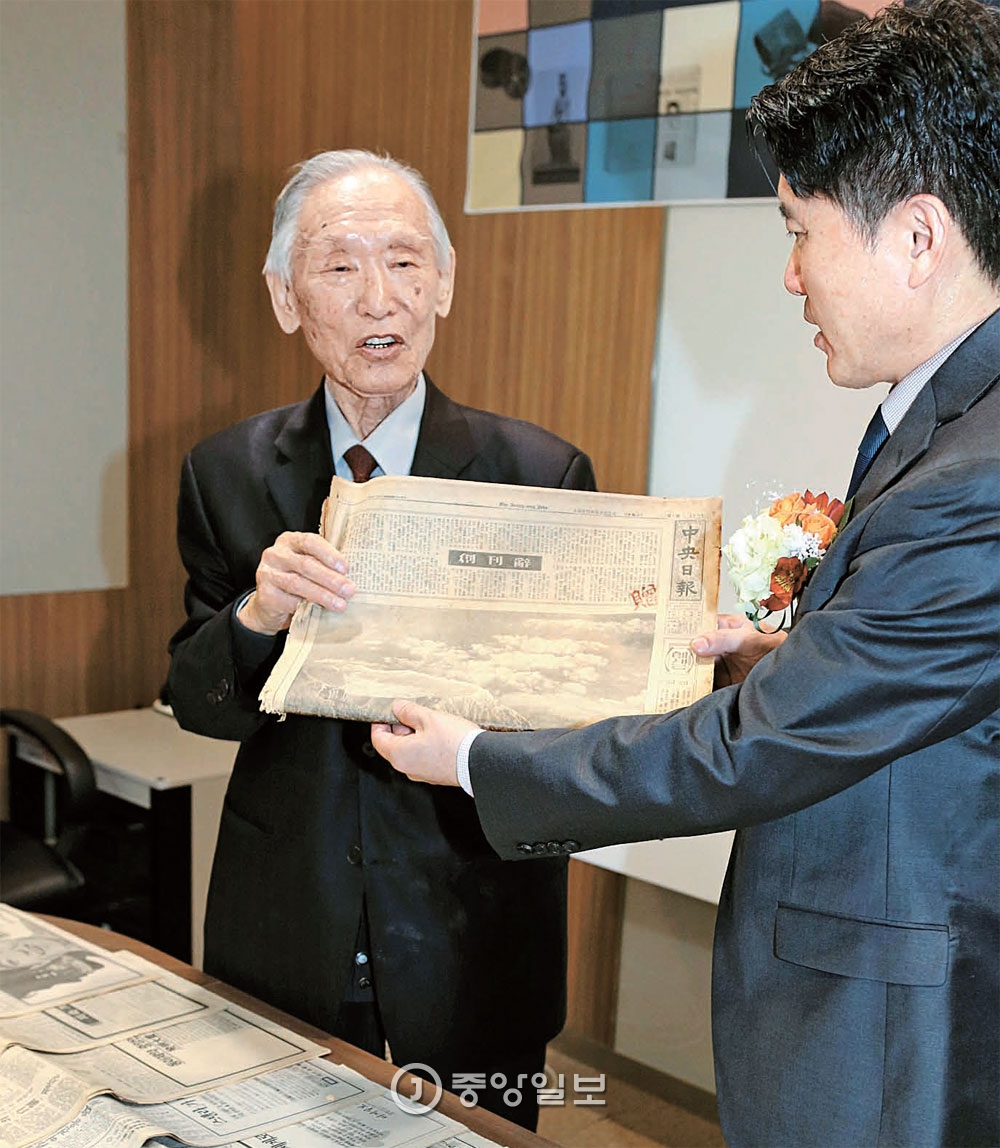 Lee Kyung-chool donated a total of 15,634 copies of JoongAng Ilbo, an affiliate of the Korea JoongAng Daily, to the National Museum of Korean Contemporary History on Tuesday.

The 96-year-old has collected most of all the newspapers each day since it was first published in 1965. Due to delivery issues, he said, he is missing about 170 issues.

Lee started his subscription in 1965, when he was 46 years old. The first edition was included in his donation and in surprisingly good condition considering its age.

Lee said the newspaper served as a bridge connecting him to the outside world, which motivated him to look after his copies with care.

“I had to leave my house after it was foreclosed,” he said. “I left many things behind but managed to get all my papers out.

“I didn’t know what was going on around the world when I wasn’t subscribing to the paper, but I was able to learn about various things after I started reading them.”

Lee stored the newspapers in 140 boxes, and after he ran out of space to store any more at home, he bought a storage unit for them.

His son, Lee Nak-chun, was his best aide when it came to caring for them. The 63-year-old organized the papers by month and packed them in boxes. “My main chore as a kid was to organize the papers in order,” the younger Lee said.

“Back then, butchers used newspapers to wrap meat,” he added, “and I sold every other paper but the JoongAng Ilbo to them.”

His decision to donate his collection came reading a JoongAng Ilbo interview published Sept. 22, with Choi Kyung-cheon, 71, who has collected the paper for more than 50 years now.

On its 50th anniversary, the JoongAng Ilbo interviewed Choi, who has collected 15,748 newspapers over the past five decades, starting when he was a college student.

Lee contacted the JoongAng Ilbo after reading the article to address his decision to make a donation.

On Nov. 16, the National Museum of Korean Contemporary History sent a 5-ton truck to Lee’s house in Pohang, North Gyeongsang, to deliver the newspapers to the museum’s storage facility in Yeoju, Gyeonggi.

A donation ceremony was held at the museum on Tuesday. Lee and his son attended the event together, where the museum presented him with a certificate of donation and citation.

“I am inseparably linked with the JoongAng Ilbo,” the 96-year-old said, “and there is no information on paper to be thrown away.”

“I hope more people read the newspaper and learn from it,” he added.

Lee Nak-chun added, “My family, including myself, became very close to the newspapers … and they provide a wide range of information to all readers rather than just a subset of information that readers might naturally be drawn to.”

The museum will hold exhibitions and conduct research with Lee’s archive.

“Specific years and dates are written on the boxes,” said Lee Yong-suk, a researcher at the museum. “I was really touched by how he organized all these. We will use these historical records to the best of our ability.”