Kim dreams of playing for Korea

Kim dreams of playing for Korea 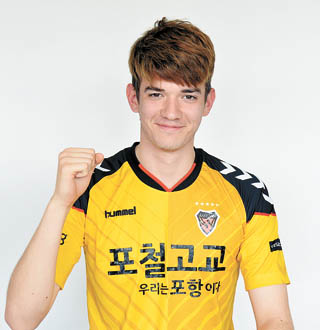 Kim Roman moved from Russia with his family when he was only a third grader in elementary school.

Born to a Korean father and Russian mother, adjusting to new environment in a new country wasn’t easy for Kim. His white skin was sometimes ridiculed by his schoolmates, and he was sometimes left confused about his national identity.

His difficulties in settling into his new home country, however, have turned out to be a blessing in disguise. To pass the time as a youngster, he would often go to the roof of his grandfathers’ house and kick a football around. That pastime changed his life, and he now has dreams of playing with Korea’s national team and Manchester United.

The game was the final match for the senior student to play with Pohang Jecheol High School. Next year, he moves on to join the Pohang Steelers in the K-League Classic.

“I was happy because it was our team’s first championship this year,” Kim said. “At the same time, it was my last championship with the school, so I felt strange.”

Kim’s football skills were recognized from an early age.

His name surfaced on the local football scene in 2011 when he was a second grader at Pocheol Middle School in Pohang, North Gyeongsang. In a national tournament final against Pungsaeng Middle School, the game was to be decided in a penalty shoot-out. However, Kim blocked three penalty shots and delivered the trophy for his school.

His performance was made into a video clip and was popular online. Impressed by his skill and his white-skinned good looks, fans gave him the nickname “Litte Yashin,” which refers to legendary Soviet-Russian goalkeeper Lev Yashin.

“I still can’t forget the thrill of that day,” Kim said.

Throughout his career, Kim has been especially strong at blocking penalties. With Kim standing in front of the net, Pohang Jecheol High School won the President’s Golden Cup and the National Sports Festival high school division final after a penalty shoot-out.

“If you watch the ball until the end, you can read the direction of where the kicker wants the put the ball,” Kim said. “I also learned how to pressure the kicker by looking in their eyes until the end. What’s important is that you have to be focused till the end.”

Pohang Jecheol High School’s interim coach, Choi Hyun, who also was a goalkeeper in his playing days, said, “His talent of blocking penalties is better than mine. Kim’s skills got better as he kept playing big matches.”

Kim’s love of athletics may have come from his parents. Before working in a trading business, Kim’s father was a baseball player, while his mother was figure skater.

Kim played as a goalkeeper when he was a fifth grader in elementary school. He was already 1.8 meters tall (5-feet-10) then, and he changed his position from midfielder to goalkeeper on the coach’s recommendation.

His posting switch opened a new opportunity. When his Singok Elementary School in Uijeongbu, Gyeonggi, won three national tournaments without a loss, Kim didn’t allow a single goal. After graduation, he was selected as scholarship student and headed to Pocheol Middle School, which is designated as the youth team for the Pohang Steelers.

“I always play the math, I’m the last man standing and will block anything from here,” he said. “I found my personal identity by playing goalkeeper, and now I have a dream.”

Despite his Russian heritage, Kim’s dream is to play for the Korea national team. He hasn’t yet represented Korea at the youth level, but he emphasized that wearing a Taegeuk Warriors uniform is his ultimate goal.

“When Korea played against Russia in the 2014 Brazil World Cup, I supported my father’s country of Korea because that is my country,” Kim said. “When the World Cup is held in my mother’s country of Russia in 2018, I hope to defend the goal wearing the Korea national team uniform.”

“Not only my body size, but my hair style is similar to De Gea,” he said. “After I play for Pohang, I hope to defend the goal for Manchester United, succeeding De Gea.”

Kim’s height is 1.92 meters, but he said he is still growing.

“Doctors say my growth plate is still open, and I hope my height will reach at least 1.95 meters,” he said. “I hope my skills also grow as my height grows.”