Sculptures worn not by time but by hands

Sculptures worn not by time but by hands 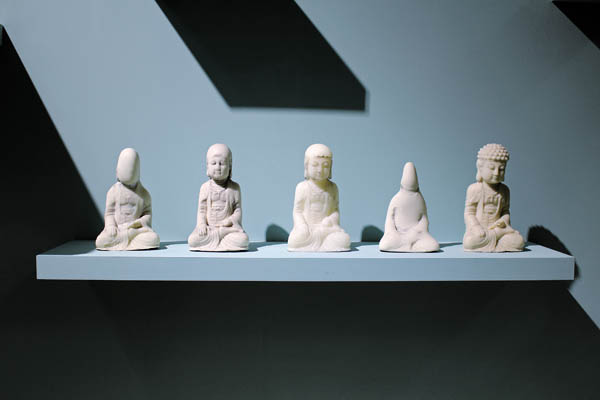 These small Buddhas appear to be ancient East Asian ivory works weathered by time. In fact, they are soap sculptures created by Korean artist Meekyoung Shin. They were sent to museum washrooms to be transformed by visitors. [MOON SO-YOUNG]

SHANGHAI - A group of sculptures now on view at Hakgojae Gallery’s Shanghai branch in the art district of 50 Moganshan Road appears to be ancient Greco-Roman marbles and old East Asian ivories, weathered by time for hundreds or thousands of years. Actually, they are soap sculpture created by London-based Korean artist Meekyoung Shin, 48, in the very recent past. 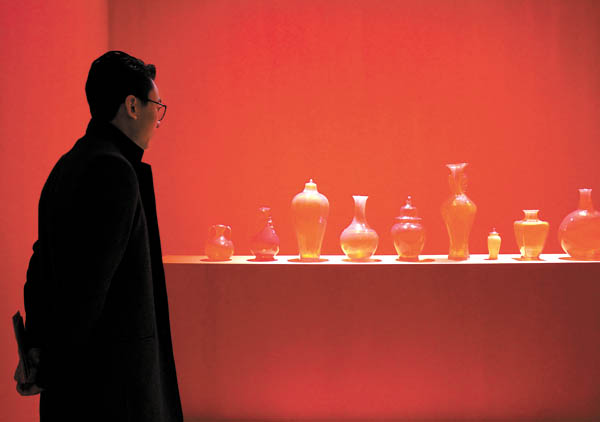 A visitor to Hakgojae Shanghai in the art district of 50 Moganshan Road looks at Shin’s “Translation - Ghost” series, which are elaborate reproductions of the existing Chinese ceramics in translucent soap. They are part of the Korean artist’s solo show titled “A Cabinet of Curiosities.” [MOON SO-YOUNG]

The sculptures were sent by Shin to various museums’ washrooms to be used as soap - and be transformed by the museum visitors. The move challenges our idea on how artworks should not be used in daily life but have permanent qualities. Now “weathered” by human hands, the soap sculptures have come to the gallery as part of the artist’s solo exhibition “A Cabinet of Curiosities,” which runs through Jan. 31. They look just like antiquities, although the context and backgrounds behind the sculptures are quite different. That’s the irony the artist intends. 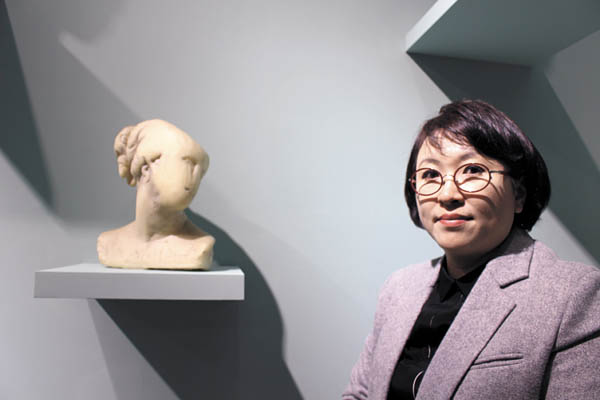 Artist Shin poses with one of her “Toilet Project” sculpture series at Hakgojae Shanghai. [MOON SO-YOUNG]

“My works are based on the complicated thoughts and feelings I got when I went to study in Britain after majoring in sculpture in Korea,” Shin told the press at Hakgojae Shanghai on Dec. 19. “I had already studied in Seoul the Western sculptures, in particular, the classic sculptures. But when I came to Europe, I recognized the meaning and context of the sculptures were different from what I learned. The same applies to the reverse perspective. I saw East Asian arts and crafts including Chinese ceramics on view in European museums in different meanings and contexts.

“It is a kind of translation … things are lost or added in translation,” she continued. “So I began to ‘translate’ old masters’ arts and crafts in the East and the West into my soap works. I use soap because I question the permanence of sculptures and art.” 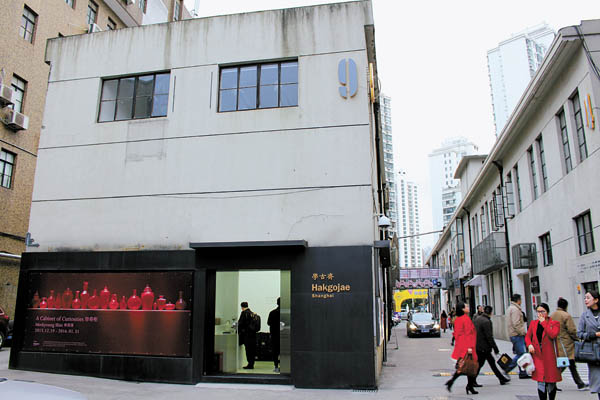 The exterior of the gallery. [MOON SO-YOUNG]

Chinese art critic Duan Jun wrote in the exhibition catalogue, “As splendid fireworks consumed in a flash may leave resplendent and everlasting memories in one’s mind, why should we be caught up and insist on the eternal life of an artwork?”

Shin’s soap works include re-creations of ancient sculptures and Chinese ceramics. Some of them have the splendid colors and patterns of the original glazes, whereas others only have the shapes of the original ceramics, with simple translucent colors. The former group is the artist’s “Translation” series and the latter is “Translation ? Ghost” series. Parts of the two series are on view at Hakgojae Shanghai.

Shin’s works explore the “translation” between East and West, which is a matter of interest to Chinese people as well as Koreans. That’s why Shin was chosen by Hakgojae, one of Korea’s leading galleries, to hold a solo exhibition in celebration of the second anniversary of the gallery’s Shanghai branch, gallery director Woo Chan-gyu explained. Hakgojae Shanghai held a retrospective exhibit of the Korean-born video art pioneer Nam June Paik(1932-2006) on its first anniversary, which was designated one of the most meaningful art exhibitions in the city last year by Chinese art magazine Yishu Caijing, according to Woo.