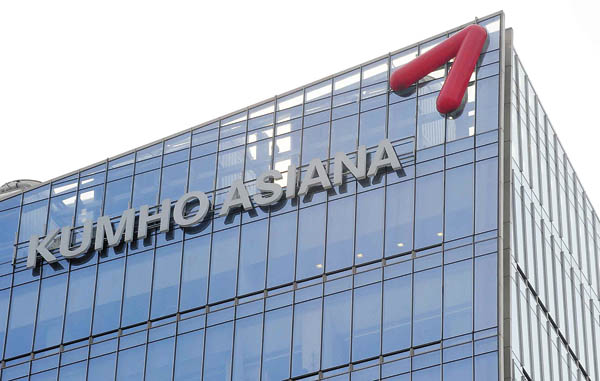 Kumho Asiana Group headquarters in Gwanghwamun, central Seoul on Sunday as its key subsidiary Asiana Airlines is about to announce plans for major cutbacks in flights and operations on Wednesday. [NEWSIS]

Asiana Airlines, the nation’s No. 2 airline, has announced major cutbacks as it “desperately” struggles to recover from the impact of the Middle East respiratory syndrome (MERS) outbreak in June.

The company made the announcement that it would be accepting voluntary resignations and shrinking existing routes at a meeting of 140 executives and team leaders held on Christmas Eve.

The company did not reveal how many jobs would be lost by the measures.

Routes to Russia’s Vladivostok, Indonesia’s Bali and Myanmar’s Yangon, which are relatively less popular, will be suspended starting next spring, the company said.

The cost-saving measures are “part of the voluntary and desperate efforts that the management normalization task force consisting of mid-level workers proposed to prepare for their own future,” an Asiana spokesman said. The plans will be confirmed on Wednesday, though insiders say most of the proposals will carried out.

Asiana entered an emergency management status in July after MERS spread quicker than expected and the number of inbound tourists slumped drastically.

Its operating profit in the March-June period swung to minus-61.4 billion won ($52.6 million), posting a loss for the first time since the full fiscal year of 2012. Profit recovered to 31.2 billion won in the third quarter.

Asiana lost some 150 billion won from June to August, mainly because the airline concentrates on short- and mid-distance routes to Japan and China, compared to its rival Korean Air. The recent increase of low-cost carriers such as Jeju Air and Jin Air also dealt a huge blow.

The company announced in August that it would scrap less popular expensive first-class seats from its entire fleet, except on its recently-bought Airbus A380. However, even though the number of travelers rebounded due to slumping oil prices, the profitability for each seat has hardly improved.

The company accepted voluntary leaves of absence in 2003, when severe acute respiratory syndrome broke, and in 2008 and 2013, when high oil costs hurt its performance.

Asiana’s cutbacks come as its mother group, Kumho Asiana, has to pay 722.8 billion won on Tuesday to reclaim Kumho Industrial, a construction arm that managed to graduate from a five-year debt workout program in December last year.

Creditors of Kumho Industrial decided in May to sell their stake in the company to Kumho Asiana Group after a sales bid fell through due to differences over price. Kumho Asiana Chairman Park Sam-koo has been striving to take back the de facto holding company.

Of the 722.8 billion won acquisition fee, the group borrowed 570 billion won from other conglomerates and banks. The remaining amount should come out of Kumho affiliates.