Festivals round out a year of music

Festivals round out a year of music 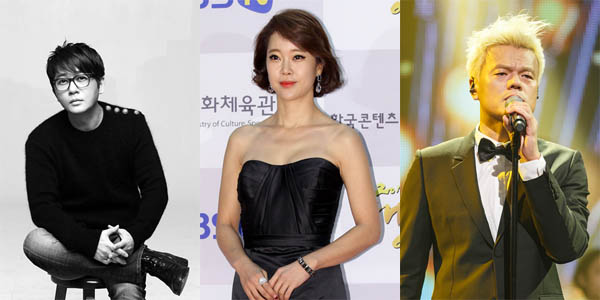 Big names in the music industry such as, from left, Shin Seung-hun, Baek Ji-young and Park Jin-young, will perform at MBC’s year-end music festival on Thursday. [JOONGANG ILBO]

Of the many indicators that signal the end of the year, year-end TV music festivals are the favorite annual tradition of music lovers.

This year, fans can expect to see artists such as Exo, Girls’ Generation, Sistar, 2PM, Red Velvet, B.A.P, Ailee and other hot K-pop acts that have released new songs and albums throughout the year .

Since the festivals usually have similar lineups, Korea’s top three broadcasters - KBS, MBC and SBS - try to differentiate their shows by adding new elements each year.

Of the three networks, SBS was to hold the first music festival of the year on Sunday, with comedian Shin Dong-yup and singer-songwriter IU as hosts.

The news of SBS recruiting IU as a host was surprising because the singer previously announced that she would not appear on any end-of-the-year music festivals in order to focus on her nationwide concert tour.

Furthermore, it was IU’s first public appearance since several scandals emerged around her album “Chat-Shire,” which came out in October.

The singer came under fire for reinterpreting the 5-year-old protagonist of the novel “My Sweet Orange Tree” in a sexual way in the lyrics of one of the tracks from “Chat-Shire.” IU was also criticized for sampling Britney Spears’ 2007 song “Gimme More” without permission on a bonus track from the album.

SBS has invited 27 K-pop acts to its festival, which was scheduled to start at 9:40 p.m. Sunday at COEX in southern Seoul. The broadcaster said three rookie K-pop groups - iKon, Twice and Up10tion - would appear exclusively at its festival.

A few days later, KBS will hold its festival on Wednesday at 7:50 p.m. at Gocheok Sky Dome in Guro District, western Seoul.

“We aim to please the ears of not only teenagers but music listeners of various ages,” KBS said in a press release.

Along with 18 K-pop boy and girl groups, singers such as Ali and Sonnet Son, also known as Son Seung-yeon, who regularly appear on the popular TV music show “Immortal Songs,” will attend the festival. Since “Immortal Songs” reinterprets songs of the 1960s, ’70s and ’80s, the show is popular among older music fans.

Kimchangwan Band, one of the country’s longest-running rock bands, will also make a special appearance.

Some of the band’s songs were recently featured on the popular cable channel drama series “Reply 1988.”

KBS also beefed up the technology for this year’s festival. “We’ll broadcast the live show using a high-quality spidercam used for the global audition show ‘The X Factor’ and the concerts of Taylor Swift.”

The following day, New Year’s Eve, MBC will hold its annual festival at 8:55 p.m. at the Ilsan Dream Center in Gyeonggi.

MC Kim Sung-joo and Yoona of Girls’ Generation will pair up to host the event.

Of the three networks, MBC features the most music industry heavyweights who rarely appear at year-end festivals, such as singer-songwriter Shin Seung-hun, diva Baek Ji-young, often dubbed the queen of original soundtrack songs, and JYP Entertainment head Park Jin-young. Trot singers Tae Jin-ah and Hong Jin-young are on the list, too.

Trot is an old form of K-pop popular among those in their 50s and 60s.

It is the first time Shin is appearing at such a festival in nine years. He made a comeback this year by releasing his 11th regular album in October. Baek and Shin will both collaborate with younger singers at the festival.

Meanwhile, Big Bang, which returned to the music scene this year, will not appear on any of the three music shows.

YG Entertainment, the five-member boy group’s agency, said the group will focus on working on their upcoming album.