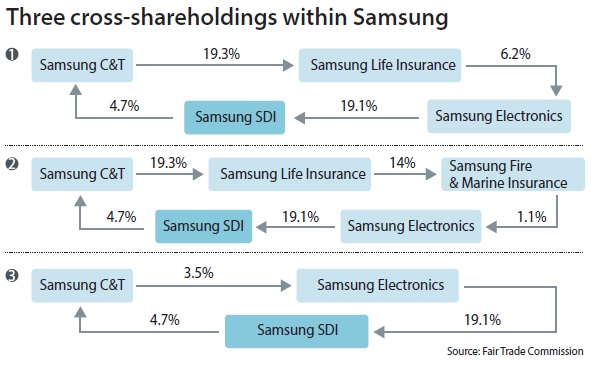 Samsung SDI has been told to sell five million shares before March 1 after the Fair Trade Commission (FTC) ruled that an internal merger among the company’s affiliates broke the antitrust agency’s guidelines on cross-shareholding.

The FTC said on Thursday that the merger and acquisition (M&A) deal between Cheil Industries and Samsung C&T on Sept. 1 strengthened cross-shareholding practices within the country’s largest conglomerate.

“Samsung SDI must now sell five million shares, or the 2.6 percent stake, it now holds in the unified entity before March 1,” the FTC said in a statement.

The merger in September created the country’s fourth-largest listed company, with a market capitalization estimated at about 27 trillion won ($23 billion).

Samsung accepted the authority’s guideline and said it will ask for a grace period to minimize the impact of the sale on the market.

“We feel regret over the FTC’s ruling but will follow the ruling,” a Samsung spokesman said. “Selling as much as five million shares within two months could result in stock price plunges and harm shareholders, so we plan to ask for more time to sell the stake.”

Whether the FTC will accept Samsung’s request is unknown.

“Samsung hasn’t yet made an official request,” said Kim Jung-ki, director of the business group division at the FTC. “We will review the request if made, but there is no fair trade law regarding an additional grace period.”

The deal carried symbolic significance as a de facto holding company of the country’s largest business group, with Jay Y. Lee, the scion of Samsung’s founding family, taking over as the largest shareholder, with 16.5 percent.

The total stake held by the Lee family is more than 30 percent.

The merger between Samsung C&T and Cheil Industries was considered by many as a maneuver to help the Lee family exert more influence over Samsung Electronics, as part of a generational change from the now-hospitalized Lee Kun-hee to his 47-year-old son, Jay Y. Lee.

The FTC also announced detailed guidelines for other M&A deals, aimed at preventing confusion and resolving vagueness in mergers within conglomerate subsidiaries.

Under the country’s fair trade law, affiliates of large business groups with assets of 5 trillion won or more are banned from making equity investments or loan guarantees to one another.

The rules governing cross-shareholding by conglomerates have been intensified to prevent large companies from penetrating into business areas of small and medium-size businesses.

When cross-holding ties become inevitably stronger after M&A deals, the authority offers a six-month waiver for companies to voluntarily resolve the issue.

If Samsung fails to meet the March 1 deadline, the FTC will issue a corrective order or fine.

A possible way of disposing the stocks will be making a block deal, according to market observers, but arranging such a deal will take time.