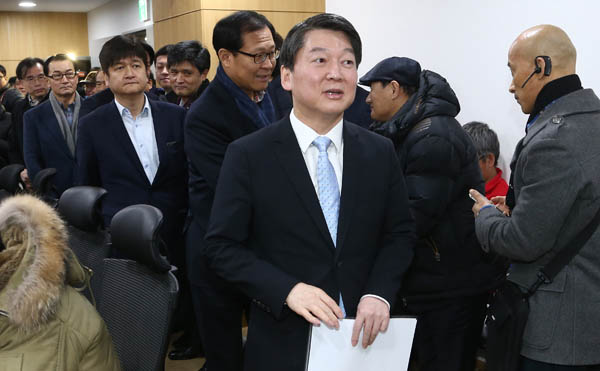 Rep. Ahn Cheol-soo said at a press conference at the National Assembly on Sunday that his new party will push for rational reform instead of the outdated conservative and liberal parties. [KIM KYUNG-BIN]

Ahn Cheol-soo, the political maverick who co-founded the main opposition party last year and abandoned it two weeks ago, said Sunday that his new party will stand for “rational reform,” replacing the outdated mainstream conservative and liberal parties.

Ahn, a first-term lawmaker who defected from the New Politics Alliance for Democracy (NPAD) on Dec. 13, held a press conference Sunday morning to announce plans for his new party, including major agendas to push for substantial societal change.

“Now we have to end the politics which let the people become victims of political confrontations,” Ahn said, criticizing the continual political deadlock between the main ruling and opposition parties, which have failed to reach agreements on pending issues such as youth unemployment, economic polarization and the low birthrate.

“The new party will put rational reform at the center of politics,” Ahn said as he pledged to pursue politics that solve problems, not make problems.

He underscored that the party will maintain the three principles of listening to the people, opening the party for the people and governing the nation with the people.

“The crisis that the Republic of Korea is facing cannot be resolved by a single leader or by one political group. We have to amass the power,” Ahn said. “No country has succeeded with political polarization.”

Ahn said the goal and vision of the new party is to bring about total change in society, including policies that would promote fair economic growth and education reform to resolve the gap between social classes.

“We have to spend money effectively in various sectors including health, education and culture,” Ahn said.

“If more finances are needed to forge these infrastructures, tax increases will be inevitable,” he continued, adding that he will look into the tax system overall and adjust the balance among varying income levels.

He also stressed a flexible and firm diplomatic strategy based on the alliance between the United States and Korea and the partnership with China.

The presidential hopeful had announced he would form a new political party by Lunar New Year on Feb. 8, with the goal of winning at least 100 seats in the April general elections and the presidency in 2017.

Ahn left the NPAD on Dec. 13 after his demands to hold an election for new leadership were repeatedly turned down by Chairman Moon Jae-in. The two were rival candidates in the 2012 presidential election. Ahn bitterly withdrew from the race after being continually outmaneuvered by Moon, and Moon was narrowly defeated by Park Geun-hye.

Including Ahn, six lawmakers have left the NPAD to join the new party, and high-profile NPAD lawmakers, including a former chairman, Kim Han-gill, are planning to join Ahn. If Ahn manages to recruit more than 20 lawmakers, the new party will become a so-called negotiation bloc inside the National Assembly which would have negotiation power and receive higher state subsidies.