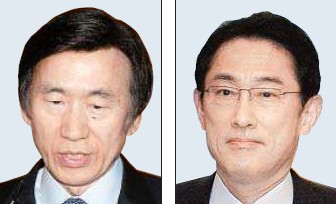 Korea and Japan held director-level talks on Sunday to narrow down on differences in settling the issue of wartime sexual slavery, which stands as the biggest obstacle in the way of improving bilateral ties.

The talks came ahead of ministerial-level talks today between Minister of Foreign Affairs Yun Byung-se and his counterpart, Fumio Kishida, in Seoul, a high-stakes meeting that could untangle the long-running dispute over Japan’s mobilization and abuse of young women during World War II as sexual slaves for its soldiers.

Victims of the practice are euphemistically known as comfort women.

The 12th round of talks since April 2014, the Sunday talks were attended by Lee Sang-duk, director general of the Ministry of Foreign Affairs’ Northeast Asian bureau, and his Japanese counterpart, Kimihiro Ishikane. The meeting lasted two hours, and details were not released.

The talks came after Seoul bristled at what it saw as Tokyo’s attempt to gain an upper hand in the ministerial talks today with its apparent leaks to the media at home.

A series of articles were published in Japanese dailies over the past few days that reported on alleged details of tentative agreements between the two neighbors on apologizing and compensating the victims of sexual slavery.

“At a moment when nothing has been decided before the ministerial talks, preposterous reports keep coming out of the Japanese media,” Cho June-hyuck, spokesman for the Foreign Affairs Ministry, said on Saturday. He continued that the Korean government couldn’t help but wonder if the Japanese government was sincere in coming out for ministerial-level talks scheduled for today.

One story that sparked particular annoyance from Seoul was a report by the Yomiuri Shimbun on Friday, citing an unnamed Korean official, which said Seoul was reviewing the option of relocating the statue of a girl symbolizing comfort women from its current location to a place where a memorial hall for the victims is to be built in Yongsan District, central Seoul. The statue now stands in front of the Japanese Embassy in Seoul and has been a rallying point for Korean activists calling for a formal apology and compensation from the Japanese government for the remaining 46 victims.

In response to the article, the Ministry of Foreign Affairs made clear that it had no intention of relocating the statue and stated it did not have the authority to do so because it was erected by civilians.

A senior government official said on Sunday that while the two sides were working on drafting a resolution for the comfort women issue, the controversial topic of statue relocation was not included in the draft.

“Even if Japan raised its demand [for statue relocation] during the talks [on Monday], we would simply refuse it,” the official said on the condition of anonymity given the sensitive nature of the matter.

Seoul has seen the string of media reports as Tokyo’s efforts to put itself at an advantage for the highly anticipated talks between the foreign ministers of the two countries scheduled for today.

Among many issues to be addressed, one critical point will be whether Japan will issue a formal apology for comfort women and acknowledge the state was responsible for running the inhumane brothel system.

Seoul has long insisted that Tokyo must present a clearly worded statement accepting its legal responsibility for the slavery system. Tokyo has maintained the issue was already resolved through a 1965 claims settlement agreement.

As Tokyo has refused to accept legal responsibility for the events and tried to settle the issue by offering “humanitarian assistance” to the victims, negotiations have repeatedly broken down.

In rebuttal, Korea has insisted that the comfort women practice amounted to a crime against humanity and therefore the 1965 agreement didn’t cover it. It also demanded Japan provide reparations, not humanitarian assistance, to the 46 remaining victims.

Foreign Affairs Minister Yun said on Sunday that Korea remains unchanged in regards to the 1965 settlement, in an indication that it still sees the settlement as excluding comfort women victims from compensation.

As for an apology, Seoul insists it must be issued in the name of Japanese Prime Minister Shinzo Abe and written unambiguously to accept legal responsibility and atone for the brothel system.