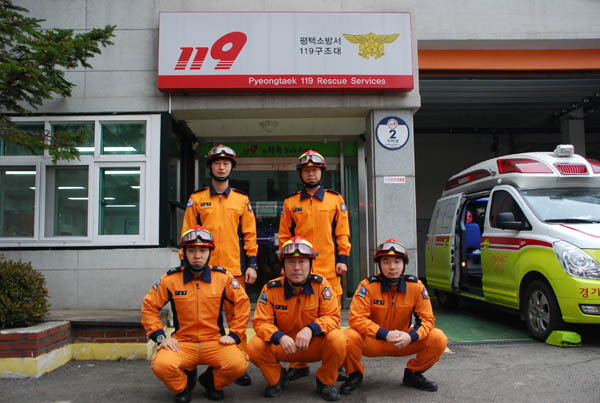 The five firefighters to be promoted for extinguishing a blaze on the Seohae Grand Bridge on Dec. 3 are, clockwise from top left: Park Sang-hee, Yu Jeong-sik, Kim Kyeong-yong, Park Sang-don and Lee Tae-yeong. [GYEONGGI PROVINCIAL GOVERNMENT]

Gyeonggi Gov. Nam Kyung-pil announced on Friday the planned promotion of five firefighters from the Pyeongtaek Fire Station as a reward for putting out a fire on the Seohae Grand Bridge earlier this month.

They will be rewarded in the coming weeks for having taken the lead in the three-hour firefighting effort on Korea’s third-longest bridge.

Nam praised their bravery, saying the firefighters risked their lives on Dec. 3 by climbing a 100-meter (328-foot) tower in harsh weather conditions to help prevent what could have developed into a much greater calamity.

The fire left one dead and two injured when a cable, which extended from one of the two towers of the bridge, caught fire and snapped. Firefighter Lee Byeong-gon, 54, died after a direct hit from the falling cable, which was 50 meters in length and 280 millimeters in diameter.

Two other cables that came into contact with the fire were damaged.

The precise cause of the fire remains unclear, but the Korea Expressway Corporation, which manages the bridge, said it likely had to do with lightening.

The five firefighters, who were among some 60 firefighters dispatched to the scene, took an elevator up to a crossbeam linking two columns of the tower closest to the blaze.

Helicopters couldn’t reach the site due to strong winds.

Unable to take direct aim at the blaze because a column was in their way, the firefighters poured water down the cables that had caught fire, causing the water to run down to reach the flames. They took turns partaking in the risky operation, in which one would hang from a rail and two others would help by holding on to the hanging person.

“The only thing I had in mind was to put out the fire,” firefighter Park Sang-don said. “I was able to pull it off thanks to my colleagues, who risked their own safety in a time of danger.”

In paying homage to fallen firefighter Lee, Park pledged to live by Lee’s moral of self-sacrifice. “I lost a coworker whom I truly looked up to. But at the same time, I feel relieved to have prevented a national disaster,” he said.

The four others to be promoted by one rank on Jan. 4 are Lee Tae-yeong, Yu Jeong-sik, Park Sang-hee and Kim Kyeong-yong.