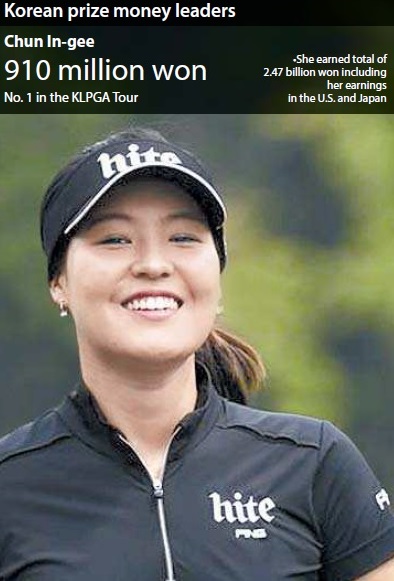 2015 will be remembered as the best year for Korean female golfers. While fans enjoyed the rise of a new star in the KLPGA Tour, they also saw Korean women dominate the game in the United States and Japan.

In the U.S. LPGA Tour, Korean golfers accomplished a combined 15 wins out of 31 tour events, the best record ever.

The figure doesn’t include players of Korean-descent, such as Lydia Ko or Michelle Wie.

And Korean women didn’t only win trophies, they also pocketed cash, and lots of it. Excluding promotional events, they earned 28.7 billion won ($24.7 million) from the LPGA Tour and the JLPGA Tour this year. Including the money from the KLPGA Tour, the golfers collected a combined total of 46.8 billion won.

And Koreans have collected a huge 40 percent of that prize money.

Among Korean golfers, world No. 2 golfer Park In-bee, who also had five victories this season, is the richest golfer, earning 3 billion won. The LPGA Rookie of the Year, Kim Sei-young has taken home about 2.1 billion won, and world No. 8 Yang Hee-young (Amy Yang) collected 1.7 billion won. 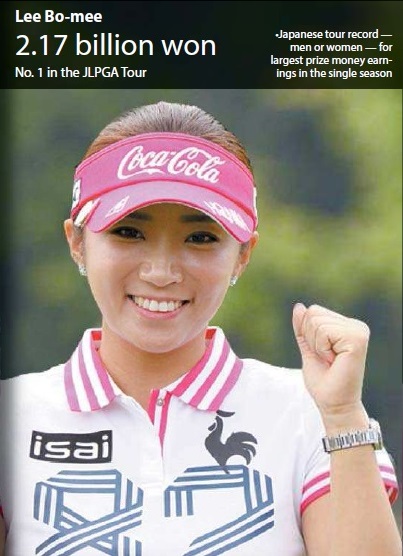 The dominance of Korean ladies is also obvious in the JLPGA Tour.

In Japan, four Koreans were in the top five money list. With No. 1 Lee Bo-mee leading the way at 2.2 billion won, Shin Ji-yai was third at 1.1 billon won followed by Ahn Sun-ju at 1 billion won and Lee Ji-hee at 900 million won.

In particular, Lee Bo-mee’s earnings this season are a Japanese record for both men and women. The 27-year-old won seven events this season and was named Japanese tour MVP.

The KLPGA MVP Chun In-gee also bagged winnings in Japan as well. The 21-year-old won two major tournaments in Japan. As a result, Koreans have earned nearly 8.3 billion won in the JLPGA Tour.

Chun, who will mainly play in the U.S. LPGA Tour from next season, earned more money overseas than in Korea. She made 900 million won with five wins in the KLPGA Tour. Including her revenues in the LPGA Tour (1 billion won) and JLPGA Tour (500 million won), her 2015 earnings reach 2.4 billion won, more than Lee Bo-mee’s.

While the golfers focused on winning and collecting prize money, they also gave back to those in need. 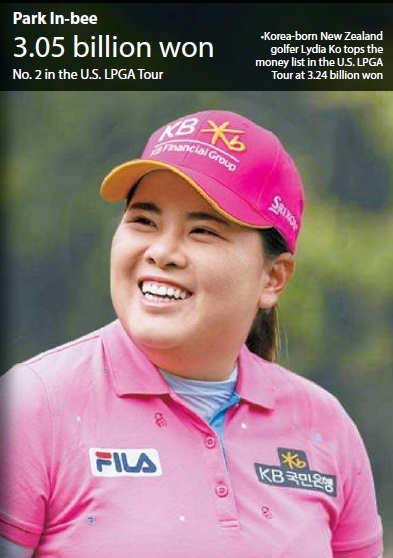 Park In-bee has been involved in various charity activities since 2008. She has been donating 20,000 won for every birdie she makes in the LPGA Tour, to local charity group Make-a-Wish Korea. So far, the career Grand-Slam achieving golfer has made more than 2,400 birdies.

Choi Na-yeon and Kim Hae-rym are also known for their charity activities. Two are Honor Society members of charity organization Community Chest of Korea, the membership of which is given to those who have donated at least 100 million won.

Choi and her fans donated 70 million won this year to help poor neighbors, while Kim has been donating 10 percent of her prize money to charity activities since 2009. This year, she has donated 49 million won.

Park Sung-hyun, who appeared as a new star after winning three events in the KLPGA Tour, became an Honor Society member last week after donating more than 100 million won. She was No. 2 in the KLPGA Tour prize money list.

Golfers Ryu So-yeon and Baek Kyu-jung not only donate money, but also participate in community service activities to help the needy, while Kim Hyo-joo donates money to 15 local charity groups or organizations every month.

And some golfers even extend their charity activities overseas.

In Japan, Korean golfers are improving their public image with charity activities. For the last six years, Koreans have topped the prize money list five times in the JLPGA Tour, raising some hostile voices in Japan that Korean golfers just take money and leave.

Korean golfers are trying to get close to Japanese fans by getting involved or donating to charities. Lee Bo-mee recently donated 10 million yen ($83,000) to help children in Fukushima who suffered from the 2011 earthquake and tsunami, while Shin Ji-yai last year donated confectionaries
and snacks to orphanages and welfare facilities.

After winning the Salonpas Cup in May, Chun In-gee also donated 30 million won to victims of the the 2011 earthquake and tsunami. After the winning the U.S. Women’s Open, she donated $10,000 to a charity organization in Lancaster, New York with an event flag with her autograph. Originally, the organization planned to put Chun’s autographed flag up for auction to raise funds.