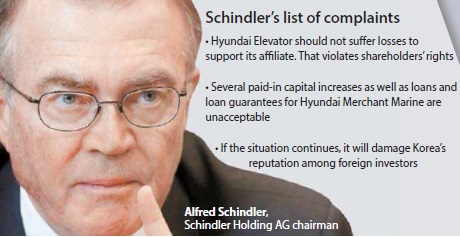 In an unprecedented move, the Swiss government has asked the Korean government and even the Blue House to help with a feud between Hyundai Group and Swiss elevator manufacturer Schindler.

According to government sources on Monday, Jorg Alois Reding, the Swiss ambassador in Seoul, recently met several Korean government officials, including An Chong-bum, senior presidential secretary for the economy, to request a solution to a dispute between Hyundai Elevator and Schindler.

“All I can say is that I am trying to help create an environment in which the two sides [Hyundai and Schindler] can make a good and productive business together,” Ambassador Reding told the Korea JoongAng Daily in a phone interview.

When asked if he met any executives of Hyundai to resolve the problem, Reding said, “I can’t answer that question since I don’t make comments on things like whom I met or where I went when it involves business.”

“What we know is that An met the ambassador to listen about difficulties affecting a foreign investor,” a spokesman for the Ministry of Trade, Industry and Energy said on the condition of anonymity. “But we think the possibility is zero that the government will intervene in a business activity operated by two private companies.” 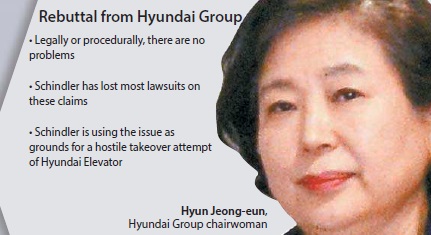 Schindler acted as a white knight for Hyundai Group in 2003 when chairwoman Hyun Jeong-eun was competing with another family member over management control of Hyundai Elevator.

The competition was between Hyun and the younger brother of late Hyundai Group founder Chung Ju-yung, Chung Sang-young. He was attempting to gain control of the elevator company through the company KCC.

Schindler swooped in as an ally of Hyun and bought a 20 percent stake in Hyundai Elevator.

But in 2010, the Swiss elevator company opposed Hyundai Group competing against Hyun’s brother-in-law and Hyundai Motor Group Chairman Chung Mong-koo in an acquisition of Hyundai E&C. The construction company, which was formerly part of Hyundai Group, ended up in the automotive group.

Relations between Schindler and Hyundai Group really soured in 2011. Hyundai Elevator signed a contract with five financial companies that guaranteed annual profits of 5.4 percent to 7.5 percent on shares they purchased in HMM. The stock that the financial companies purchased was to be used to defend HMM in case of a hostile takeover attempt.

Since 2011, Hyundai Elevator has made five paid-in capital increases as well as an issuance of convertible bonds, which Schindler claimed were ways to shore up HMM. More lawsuits were filed, but most were dropped, with the exception of the 718 billion won compensation case.

Schindler’s shares in Hyundai Elevator, which once reached 35 percent, fell to 17 percent recently.

But since HMM started suffering from new financial hardships this year, the Swiss company apparently sent out an SOS to its government.

Regarding the support, Hyundai Group said there is no legal problem with Hyundai Elevator giving financial support to HMM. “We have already reported this to the FSC,” a Hyundai spokesman said. But local civic groups, including Solidarity for Economic Reform, recently requested the FSC and Fair Trade Commission determine whether the support is fair.