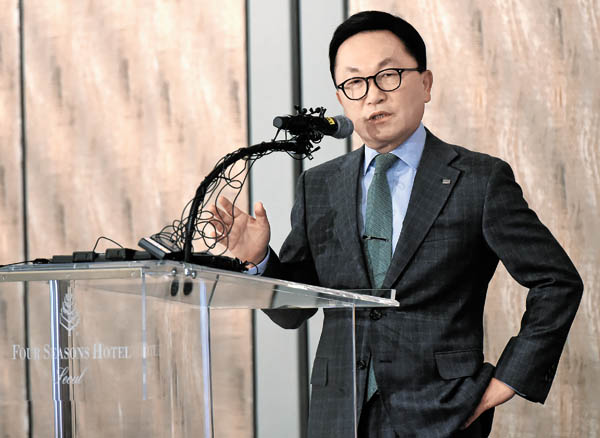 Mirae Asset Financial Group Chairman Park Hyeon-joo vowed on Monday to change the DNA of the Korean financial industry and equity market which is “soaked in defeatism” once the takeover of KDB Daewoo Securities is completed.

Park, an iconic figure who created one of the leading brokerage firms in the country after starting off as an ordinary stock broker, stressed the importance of bold and aggressive investments that the Korean economy seems to have lost in recent years.

He said on Monday that the Korean financial industry needs to be more imaginative and to make decisions that are considered impossible to expand globally.

Park’s statements came after the Korea Development Bank (KDB) announced on Christmas Eve that it has chosen Mirae Asset Securities as the winning bidder for the country’s second-largest brokerage firm.

“Recently the mood of fearing challenges and investments has been spreading and [the Korean economy] shows signs of losing its dynamics.

“When looking at the brokerage industry alone, despite posting record-level profits, instead of searching for new markets there is a strong atmosphere of downsizing and lost confidence. We are at a point where new challenges and aggressive investments are necessary before it is too late for our society that has entered the phase of low growth and an aging society.”

Park stressed that the Korean financial industry is soaked in defeatism and is far behind other countries.

“Why isn’t there a Samsung in the Korean financial market?” Park asked. “To create a financial company in the likes of Samsung it shouldn’t be done based on specific data. It needs to imagine the impossible.

“Companies like Samsung and Hyundai created a world that is impossible and to do so it needs passion and the mind that welcomes challenges.”

Park said the DNA of Mirae Asset has been restless and continually evolving adding that the company was first founded in 1997 when the country was struggling with one of its worst financial crisis. He hopes that once the two brokerage houses merge it will create the foundation for changing the DNA of the Korean economy as well as the equity market.

“If we don’t do anything we won’t suffer failure in the immediate future,” Park said. “But [we may] gradually disintegrate. Mirae Asset will remain a permanent innovator that will continue to face challenges in the future.”

Park said he plans to complete the merger within a year.

“Mirae specializes in asset management while Daewoo Securities, which is strong in investment banking, specializes in wholesale trading,” Park said. “This is a very strong chemistry [between the two brokerages].”

He said combining the two companies will contribute to creating the foundation that will help Korea’s financial investment industry to truly expand.

Over the years, financial assets by average households have grown, although various studies have shown that most personal fortunes are largely concentrated in the property market. This has been considered one of the key factors that has kept the Korean financial investment industry from enjoying rapid growth. But Park, who will become the head of the country’s biggest brokerage firm with equity capital of nearly 8 trillion won ($6.86 billion), said his appetite isn’t limited to the local market or even the local economy.

He plans to aggressively search for new lucrative investment opportunities in the global market with the newly-expanded global network of the combined brokerage firms.

“We plan on expanding four
finance sizes to continue to find good assets.”

In turning the newly merged companies into a global investment group, Park said he will be more focused on building stronger software power that will raise customers and investors confidence in the company rather than emphasizing the increasing size of the company.

Park added he plans to keep the name ‘Daewoo’ in the newly merged company resulting in having both Mirae Asset and Daewoo in the new banner.

Park also said he has no plans to execute corporate restructuring once the two companies are merged.

“We need to see far ahead,” Park said. “There is nothing wrong that Daewoo Securities employees have done and there is no reason to hurt the employees. I myself grew from the industry and therefore I would likely to give more opportunities.” ?