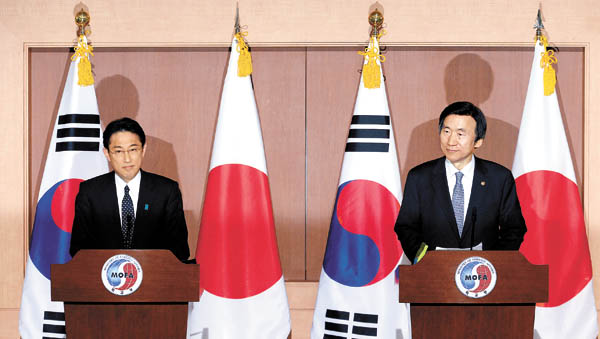 Korea and Japan struck a landmark deal on Monday in the long-running diplomatic battle over the Japanese military’s wartime sexual enslavement of Korean women by agreeing to a Japanese government apology and a multimillion-dollar fund for the victims.

The foreign affairs ministers of Korea and Japan sat down for a final negotiation in the afternoon in Seoul to resolve the decades-long impasse over the issue of the “comfort women,” thousands of women and girls forced into Japanese military brothels during World War II. Foreign Affairs Minister Yun Byung-se and his Japanese counterpart, Fumio Kishida, met for 70 minutes and announced the deal at a press conference in Seoul’s Ministry of Foreign Affairs.

In a televised media conference, Kishida announced a three-point statement that included an apology from Japanese Prime Minister Shinzo Abe.

“The comfort women issue is an issue in which the honor and dignity of many women were severely injured with the involvement of the Japanese military,” Kishida said. “From this perspective, the Japanese government fully realizes responsibility.” 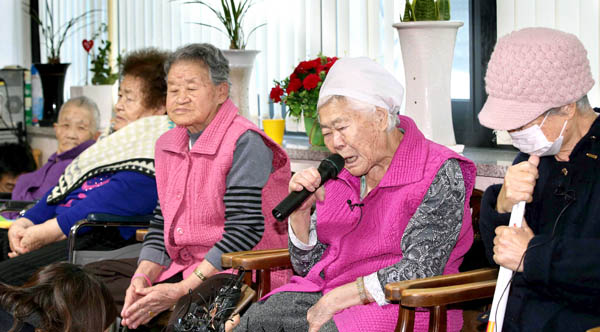 Surviving comfort women respond to the agreement reached between the foreign affairs ministers of Korea and Japan at the House of Sharing, a shelter for the wartime sexual slavery victims, on Monday. [OH JONG-TAEK]

He said Abe, as the “cabinet prime minister of Japan,” extended his “heartfelt apologies and remorse to all those who suffered immeasurable pain and incurable physical and psychological wounds as comfort women.”

The two countries agreed that the settlement is final and irreversible as long as Japan faithfully follows through with its promise. The two governments also agreed that they will refrain from criticizing each other over the issue in the international community, including at the United Nations.

He addressed the sensitive issue of Japan’s protests of a monument to comfort women erected in front of the Japanese Embassy in Seoul. The bronze statue of a girl was set up in front of the embassy in central Seoul in 2011 and has become an international symbol of Japan’s brutal wartime sexual slavery.

Yun said that he was thrilled to announce the deal before the year’s end. This year marks the 50th anniversary of the normalization of relations between Korea and Japan, and the leaders of the two countries had expressed hope that the comfort woman issue could be resolved by the year’s end.

“I truly hope that the follow-up measures to today’s agreement will be fully implemented so that the honor and dignity of the victims of the Japanese military’s sexual slavery, who endured extremely painful years, will be restored and the wounds on their hearts healed,” Yun said.

Noting that the comfort women were the most difficult and thorny issue between the two countries, Yun also expressed hope for better bilateral relations in the coming years.

Later in the evening, Abe telephoned President Park Geun-hye and expressed his apology to the victims and his remorse, the Blue House said. Abe also promised to follow through with the project to restore the victims’ dignity and honor, stressing that the matter would be resolved for good through the deal.

Park said the agreement should serve to build trust between the two countries and open a new bilateral relationship, the Blue House said.

Park issued a statement to the nation Monday evening and sought public support for the agreement, calling it “an outcome with the best effort under the time constraints and reality.”

“We will make a country where our people will never have to suffer again,” Park said. “I seek a broader understanding from the victims and the people toward this agreement and Japan’s historic misdeeds for the sake of improving Korea-Japan relations.”

The issue has been the biggest source of friction between the two countries over the past decades. Kim Hak-sun, a former comfort woman, went public with her story in 1991, bringing public attention to the issue for the first time after four decades of silence. She died in 1997.

While historians estimated as many as 200,000 women were forced into the military brothels, only 238 registered with the government as former comfort women.

Of them, 192 have died. Among the 46 surviving victims, the eldest comfort woman is 99 years old, while their average age is 89, making it an extremely time-pressing issue for Seoul.

Following the press conference, Kishida visited the Blue House and met with President Park. At the meeting, she urged Japan to “act quickly and faithfully to implement the measures as agreed to in the agreement.”

Korean officials said the deal, though it may not be entirely satisfactory, represents a significant compromise by Tokyo.

“It is the first time that Tokyo admits its responsibility without using rhetoric such as ‘moral responsibility,’” a Seoul official said.

Experts said the deal was better than a 2012 proposal from Tokyo. “That was an offer of humanitarian aid in return for Tokyo accepting moral responsibility,” said Cho Yang-hyun, a professor at the Korea National Diplomatic Academy. “But this time, Tokyo said it fully realizes its responsibility without any conditions attached. This is meaningful.

“It would have been great if Japan’s legal responsibility was stated in a more straightforward way, but that could have made this an endless battle,” he said. “It appears that Seoul made a decision at an appropriate point.”

The officials also said it was meaningful that Abe expressed his apology as the “cabinet prime minister of Japan” through his foreign affairs minister in a joint press conference. In the past, Japanese leaders have issued apologies, but the subjects were either “I” or “the government.”

The decision to finance the aid fund for the victims from Japan’s government budget is also significant progress, officials said, noting that the Asian Women’s Fund, which Japan operated to compensate former comfort women in Korea until 2002, was a civilian initiative.

“Previously, Japan had offered to use the government budget, but for humanitarian purposes,” a Seoul official said. “This agreement included a systemic mechanism to ensure the implementation of various measures for the victims. We believe this will guarantee Tokyo’s faithful execution of the agreement.”

A senior Foreign Affairs Ministry official said the agreement was the best possible choice for the future of Korea-Japan relations.

“If the victims could live forever, the government could have pushed harder without any time constraints, but the victims are dying and only 46 are left. In this circumstance, we seriously contemplated what would be the best resolution for them and for Korea-Japan relations.”

At the House of Sharing in Gwangju, Gyeonggi, a home for comfort women victims, six out of 10 residents of the shelter watched the televised press conference.

They said the Japanese government did not make clear its legal responsibility and the financial assistance would not be official restitution.

“We don’t need any medical aid or favors,” Yoo Hee-nam, 88, said. “No one will accept the creation of the fund [which is not formal restitution to pay for Japan’s legal responsibility].”

Another survivor, Lee Ok-sun, said she won’t accept any relocation of the statue in front of the Japanese Embassy. “Even after we receive restitution and an apology, it must not be moved,” she said.

While Seoul said it won concessions from Tokyo, Kishida provided a different interpretation of the deal. In his meeting with Japanese reporters after the foreign affairs ministerial talks, Kishida said it was his understanding that the statue of the girl would be relocated. He also said the fund is not formal restitution from the Japanese government but a project to restore the honor and dignity of the victims.

“There is no change from our legal stance on the claims settlement between Korea and Japan [that the issue was settled in 1965],” he said. “This agreement reaffirms a complete and irreversible resolution. This puts an end [to the issue].”

Over the past decades, animosity between the two countries ran deep while Seoul and Tokyo struggled to find a satisfactory resolution to the issue. The breakthrough came in November, when Park made a political decision and met with her Japanese counterpart, Abe, for their first bilateral summit. They agreed to speed up the negotiations to find a resolution before the end of this year. Last week, Abe ordered Kishida to go to Seoul before the year’s end to settle the issue.

The 12th round of director-level talks took place on Sunday, and the deal was struck at the foreign affairs ministers’ talks on Monday.