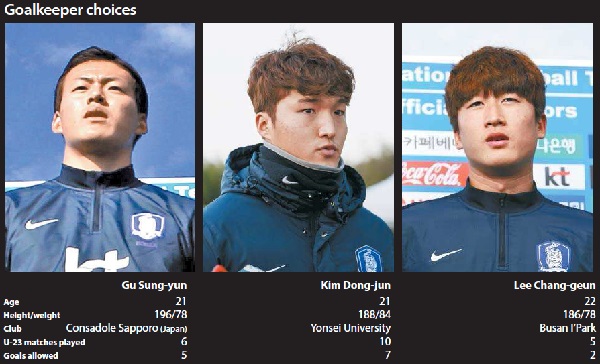 While competition to become a regular starter for the Korean men’s Olympic football team is fierce, there is one specific position that is more difficult to predict than any other: goalkeeper.

And Lee Woon-jae, the team’s goalkeeper coach, says he can’t yet pick who will be wearing the gloves for Korea in the 2016 Summer Olympics in Rio de Janeiro.

The Olympic team, led by coach Shin Tae-yong, on Saturday announced its 23-man squad for the Asian Football Confederation U-23 Championship that starts on Jan. 12 in Qatar. The tournament also serves as the Asian qualifiers for the Summer Games.

Korea, which is in Group C with Iraq, Uzbekistan and Yemen, needs to finish in the top three in this 16-team competition to advance to the Olympics.

But with the Olympics only months away, there is no clear candidate for Korea’s goalkeeper, though it will likely be a three-horse race among Gu Sung-yun, Lee Chang-geun and Kim Dong-jun.

Earlier this year, Lee stood out. However, as the 22-year-old failed to get playing time with his club, Busan I’Park FC, he was also losing his status in the U-23 team.

Lee’s position was taken over by Kim. However, the Yonsei University student, who will be playing for Seongnam FC next year, is also less than certain to win the coveted spot as he was recently sidelined for nearly a month due to lower back pain.

Given the difficulties of the other two goalkeepers, Gu rose into the position and secured his position between the goalposts for the national team. The 21-year-old started in two of the three matches that Korea played in the four-nation football tournament in China last month. However, Gu, who plays for Japanese club Consadole Sapporo, also missed a team training session last week after feeling pain in his left knee.

While the three players are eager to become the starting goalkeeper for Korea in the Summer Games, there is one person who is enjoying watching the three goalkeepers jostle for the top position: Olympic team goalkeeper coach Lee Woon-jae.

Lee was a goalkeeper for Korea in the 1994, 2002, 2006 and 2010 FIFA World Cup games. The 42-year-old has played 133 matches for Korea, the second-highest number of international matches played after retired defender Hong Myung-bo.

Lee said the competition between the trio should improve the skills of all three goalkeepers. The former Suwon Samsung Bluewings goalkeeper added that the three contenders each have their own attributes.

Lee said that he couldn’t really identify weaknesses in any of the players, but he added that while the skill level of each player is pretty much the same, their style is different, and a successful goalkeeper should “serve a similar role to an orchestra conductor” controlling play.

Lee, who ended his playing career with the Jeonnam Dragons in 2012, said that while it is important for a goalkeeper to make unbelievable saves, he also has to help his teammates from behind.

“I think stopping an opponent coming forward to our goal line is more valuable than saving the shots because that lowers the possibility of conceding goals,” he said. “A goalkeeper who can serve this role is a good goalkeeper.”

Lee emphasized that there are 21 players in front of a goalkeeper, and a goalkeeper should be able to watch what’s happening on the pitch and tell his teammates the game situation.

“A goalkeeper should be aware of all the situations happening on the ground and control teammates by telling them,” he said.

“If the team seems to be having a difficult time, he should cheer up his teammates and calm down players when the team is rushing. That’s the true role of a goalkeeper.”

Lee, who has been the U-23 team goalkeeper coach since 2013, advised the three goalkeepers to keep up the basics.

“They should be playing goalkeeper for 15 or 20 years,” he said. “But I want them not to forget the basics of goalkeeping, such as positioning, catch or movements until they retire.”

To make his final choice for the Summer Games, Lee said that the player who excels in Qatar will get the role. But until then, he will continually evaluate Gu, Kim and Lee.

“A player who can maintain his best concentration till the final whistle will grab the opportunity,” he said. “I will review not only their physique but also their mindset. I can tell the difference of 0.001 percent.”