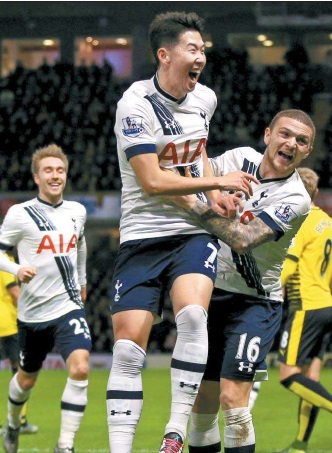 Son Heung-min scored a last-minute goal as Tottenham Hotspur provisionally moved up to third in the English Premier League on Monday with a 2-1 win at Watford.

It was Son’s second league goal this season, and third in total, and came when Watford looked to be holding out after playing with 10 men for nearly 30 minutes after Nathan Ake was sent off.

“It was a crazy atmosphere and a really important goal for the team,’’ Son said. “We are so happy.’’

Tottenham had a shock defeat against Newcastle on Dec. 13, conceding a last-minute goal for only their second league loss of the season.

“It was a fantastic moment,’’ said Spurs manager Mauricio Pochettino. “We had a late defeat against Newcastle, but today, it was the other way around.

“We played against a very good side today, and I think we deserved the win.’’

Erik Lamela put Tottenham ahead in the 17th when he ran forward before side-footing a shot which goalkeeper Heurelho Gomes couldn’t stop.

Odion Ighalo pulled Watford level with his 14th goal of the season near halftime. He held off Eric Dier before playing the ball between the defender’s legs and poked it past Hugo Lloris.

That ushered in a spell of dominance by the host, but it had Ake ejected after 63 minutes for a high challenge on Lamela.

Tottenham attacked relentlessly but could not breach Watford’s defense, and the Hornets thought they had won when a corner looked to have gone straight in for a goal.

The ball though had not crossed the line, and Tottenham had a late surprise for Watford.

Kieran Trippier crossed the ball which found Son, and he flicked it through the legs of Gomes. AP