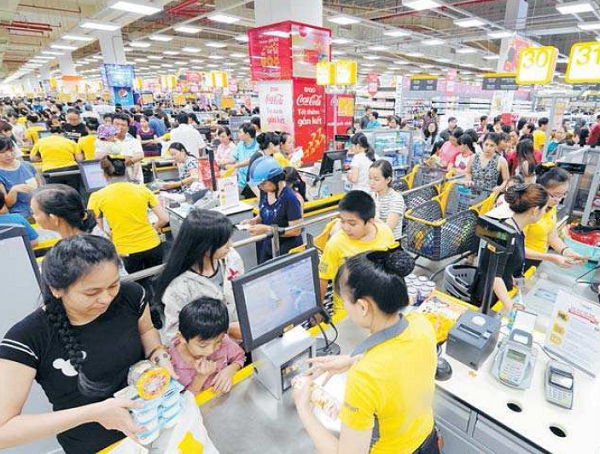 Discount retail chain E-Mart entered the Vietnamese market on Monday as part of a global expansion plan. The chain will position itself as a high-end retailer and target urbanites.

Go Vap has a high population density, with more than 28,000 people per square kilometer (10,763 square feet), which is seven times denser than Ho Chi Minh City.

The store opened at 10 a.m. Monday and more than 3,000 customers visited the first day. The last time E-Mart opened a store abroad was four years ago in Changzhou, in China’s Jiangsu Province.

The retailer’s strategy in China was considered a failure. A total of 28 E-Mart stores have opened in China since 1997, though only eight are still in operation.

E-Mart revamped its overseas marketing strategies with additional localization efforts. Among its approximately 300 new employees, 95 percent are Vietnamese, including four who recently studied in Korea.

The company also designed its parking lot for customers coming via motorcycle, which are more popular in Vietnam than cars. The parking lot will be able to accommodate 1,500 motorcycles and just 150 cars.

In its Korean section, E-Mart sells house bands brands like Daiz and NO BRAND. The company will offer the same exchange and return policies as in Korea.

The company said it will expand into Laos, Indonesia and Myanmar, according to a statement released on Monday.

E-Mart also plans to open a second store in Ho Chi Minh City in the near future.

Another local discount retailer, Lotte Mart, which already operates 11 stores in Vietnam, including three in Ho Chi Minh City, plans to open a store in Go Vap in April. Lotte’s store will include a movie theater and other entertainment facilities to compete with E-Mart.