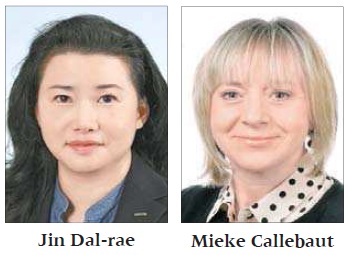 Lotte Group announced the promotion of two females to executive positions on Tuesday in its follow-up annual reshuffle at food and chemical affiliates.

Jin Dal-rae of Lotte Chilsung Beverage will become the first female managing director who began her career at Lotte. There have been other women executives at the country’s fifth-largest group, but they entered Lotte units as experienced workers

Jin entered the beverage company in 1994 after graduating from Pusan National University with a major in environmental engineering. The 46-year-old was appointed a team leader in the quality assurance division at the unit last year.

Guylian was acquired by Lotte Confectionery in 2008.

The announcement of both promotions comes as Lotte seeks to empower the female workforce.

“Following the direction of Chairman Shin Dong-bin, we have been focused on hiring women since 2006,” a representative of Lotte Group told the Korea JoongAng Daily.

“Now, 11 percent of senior workers, whose rank is above senior manager, consist of women,” the representative said. “But we are looking to expand the proportion to 30 percent by 2020.”

Also at Lotte Confectionery, CEO Kim Yong-soo moved up to president. He is credited with generating sales growth in global business.

A total of 199 people were promoted to executive positions this year, a slight decrease from last year’s 207.