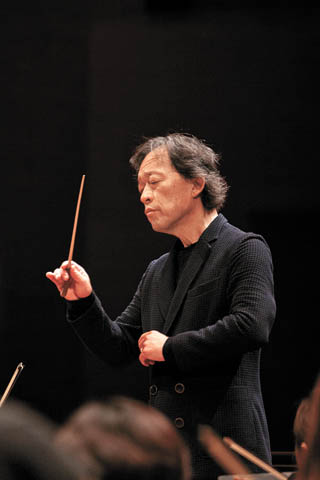 Maestro Chung is scheduled to conduct in a performance of Beethoven’s Symphony No. 9, “Choral,” tonight at the Seoul Arts Center. [SEOUL PHILHARMONIC ORCHESTRA]

Chung Myung-whun, artistic director and principal conductor of Seoul Philharmonic Orchestra, made a sudden announcement yesterday that he will leave the orchestra amid the controversy surrounding him, his wife and a former orchestra president.

Although the orchestra’s board of directors anticipated that Chung would continue conducting for scheduled concerts with or without an official contract until the next board meeting in January, as Chung had promised, the maestro seemed to have made up his mind to leave. As his contract ends Thursday, his concert scheduled today may be his last.

“I regret that I cannot continue as your music director, but as I have said before, there is one thing more important than music, and that is humanity,” Chung wrote in a letter to the orchestra. “Until this human rights issue is resolved, it is impossible to continue my musical work with you.”

The letter came two days after the Seoul Metropolitan Police Agency announced that they booked Chung’s wife, surnamed Koo, 67, without detention. Koo allegedly orchestrated the scandal that led the former president, Park Hyun-jung, to step down amid accusations of sexually and verbally harassing employees.

After the announcement, the orchestra’s directors said they could not finalize the new three-year contract with Chung they had prepared for the board meeting on Monday, adding that they would postpone the decision until next month after more discussion with the conductor.

But in his letter Chung seemed to be finished with discussions.

He said that since the human rights of 17 employees at the orchestra had been violated by the former president of the orchestra, he could not continue as conductor.

“[They were] mistreated far beyond civilized, acceptable levels. Perhaps it is a reflection of Korean society that this has been allowed to happen,” Chung wrote. “The very people who have had to endure this inhumane treatment are accused of having invented their story.”

“This could never have happened in any other country that I have lived,” he continued. “I never doubt that the truth will be revealed in the end.”

Chung expressed regret that all his and the orchestra’s achievements of the last 10 years have been overshadowed by this incident, but added that “lies and corruption may cause scandals, but human dignity and truth will prevail in the end.”

Upon the maestro’s decision, the orchestra said it will look for another conductor for next year’s scheduled concerts, of which there are about nine.