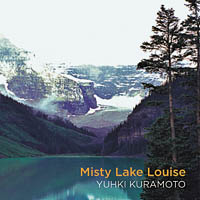 
His piano tunes are always comforting. They keep your mind at ease and somehow help you sort out your thoughts. Of course, the piano tunes themselves are beautiful.

Yuhki Kuramono released an album titled “Misty Lake Louise” in Korea after recording it with Korean musicians in Korea, where he has the biggest fan base, to celebrate the 30th anniversary of releasing his signature piano piece, “Lake Louise.”

It is also the title track of this album, in which the pianist played alongside a violin. The harmony between the two instruments offers a different feeling to Kuramoto’s “Lake Louise.”

All the other songs are reinterpretations of his existing pieces like “When You Feel Love,” “Swan Song,” “Two With The Same Soul” and so on with other instruments like cello, flute and clarinet. All 13 tracks in the album are sure to calm your busy mind down in this year-end season and grant you time to look back on 2015. The album ends with another “Lake Louise,” but this time a duet with the piano and cello, which I personally like better.