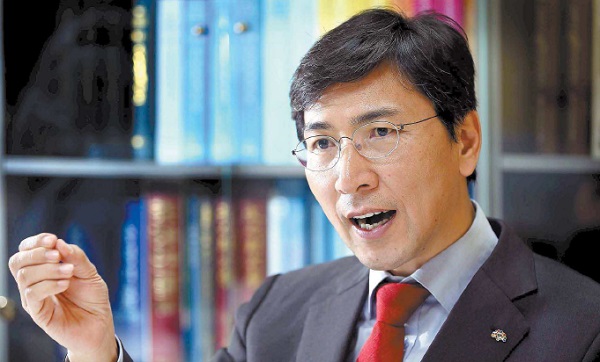 South Chungcheong Gov. Ahn Hee-jung was a well-known aide to the late President Roh Moo-hyun, and his popularity in the Jeolla region and subsequent re-election as governor has boosted his potential as a possible presidential contender for the opposition.

However, the governor has long kept his distance from National Assembly politics to focus on provincial matters - part of a greater effort to dilute his factional colors.

But following the news earlier this month of Rep. Ahn Cheol-soo’s defection from the New Politics Alliance for Democracy (NPAD), which put the main opposition party on the verge of a breakup, his perspective changed.

The former presidential aide criticized Ahn’s departure as “hazardous to the party,” and stressed the need for the main opposition to “unite” under the control of Chairman Moon Jae-in.

Q. Chairman Moon has made efforts to organize an early election polling committee and hinted that he would conditionally resign, but many of his critics have been pressuring him to step down.

A. Party members should follow the chairman they have elected, even if he loses their favor. Isn’t that the whole point of a national convention? Even if you don’t favor President Park Geun-hye, you still have to respect her as the president of our nation.

But isn’t it different to compare the president of the country and the party chairman?

Still, the fundamentals are the same. The most important basis for democracy is dialogue and negotiation, and the second is submission to the set rules. Democracy cannot continue if we break these principles.

Then what did you think when the pro-Roh Moo-hyun faction in the main opposition pushed for Ahn to step down from his post as co-chairman of the party in 2014?

At the time, Rep. Ahn and the Democratic Party merged party to party. Ultimately, the merger led to the establishment of the NPAD, so a party convention was necessary. And [as a result of February’s party convention], a new leader [Moon] emerged. So it’s not correct to say Ahn was pulled down [by the pro-Roh faction].

Do you oppose Ahn’s defection and his establishment of a new political party?

Everything must be based on common sense. Basic common sense requires talking and compromise. The second step would be to try and abide by the rules. If a chairman has already been selected via a previous party convention, the members of the party must try and solve their problems through a dialogue with the chairman. If no conclusion can be reached afterward, the party must then respect the chairman’s decision.

So is Ahn’s defection a mistake?

Yes. [If he had complaints,] he should have called for a central committee meeting, in accordance with the party’s constitution.

The main opposition party needs to absorb the young generation and the advocates for former liberal Presidents Kim Dae-jung and Roh Moo-hyun. Defecting and forming a new party are both unhelpful. It’s time to unite. Personal opinions are always different. So it’s the rule of democracy to continue talks to narrow down the gaps between opinions and follow majority rule when no consensus can be reached.

Some have said it was wise for Moon and Ahn to split since Moon is a liberal while Ahn is more moderate.

I’m not sure if the two are so different in their political standings. Whether they are centrists or liberals is just some of the gossip floating around. From my perspective, they aren’t so different.

Many contend that our legislature needs a third party to better balance out politics.

If people want multiple parties in the National Assembly, electoral laws should be changed to allow run-off elections or a multi-seat electoral district system. But the atmosphere in the National Assembly is not ripe for such discussions. The main opposition faces the crisis of a possible breakup, and the ruling Saenuri Party is also experiencing its own in-fighting.

We need more consensus on the issue. Too many cooks spoil the broth. We need to first concentrate on how to overcome the difficulties our democracy is facing.

A candidate from the main opposition running for the Nonsan and Geumsan constituency [in South Chungcheong] pledged to “make Ahn Hee-jung president.”

In the local election, I pledged to transcend the regional divisions in the country, build on my capabilities and then run for the presidency if there was a chance. I’m happy to hear somebody supports me and my ideas.

Does that mean you’re aiming to run for president in the next election?

I think there is a time for all things. When fruits ripen, they fall.

Chairman Moon Jae-in and the party seem to be in the middle of an emergency situation. Isn’t this the time for fruit to ripen?

What do you think about UN Secretary General Ban Ki-moon running for the presidency? He also comes from the Chungcheong region, like you.

It’s not best for society to have all its greatest people in the political circle. Our society is held up by great entrepreneurs, scientists, diplomats and many more. If they all become mired in politics and damage their reputations, that does the country no good. And I don’t think we should drive a UN secretary general into the storm that is domestic politics. Does the PGA scout Michael Jordan for his basketball skills? Ban is a man with a great reputation and expertise; I wouldn’t recommend ruining one of our assets.

What do you think is the ideal relationship between the president and Korea’s provincial governors?

There shouldn’t be a, “You tell me, I’ll listen,” kind of power dynamic between the two. Both entities should serve as equal partners in the country’s governance. A governor should be able to suggest international policies that can also influence provincial governance. If the construction of a railroad is planned in South Chungcheong, the president and the governor must discuss where and how long the railroad will be, also taking into consideration national logistics.