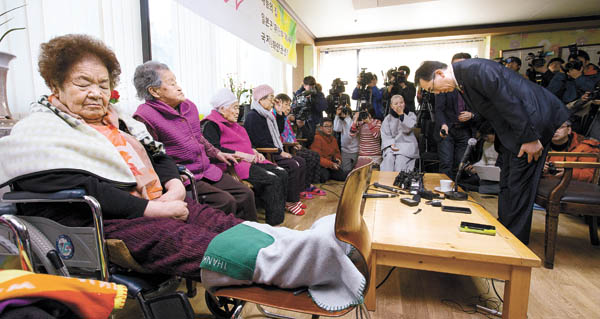 The Park Geun-hye administration tried on Tuesday to assuage angry survivors of the Japanese military’s wartime sexual enslavement, as they refused to accept a landmark settlement between Seoul and Tokyo.

The foreign ministers of Korea and Japan announced on Monday their agreement on the issue of the “comfort women,” thousands of women and girls who were forced into Japanese military brothels during World War II.

An apology from Japanese Prime Minister Shinzo Abe and a plan to establish a fund for the victims using 1 billion yen ($8.3 million) of Japan’s state budget were announced.

The two countries also agreed that the settlement is “final and irreversible” as long as Japan faithfully follows through with its promise.

After the agreement was announced, surviving victims said they won’t accept it because it failed to achieve their demands. They want the Japanese government to admit its legal responsibility and offer restitution with official apologies. Japan maintains that its legal responsibility for past misdeeds was discharged in a 1965 claims settlement between Korea and Japan.

The surviving comfort women also complained that the government kept them in the dark throughout the negotiation process.

Fueling public anger in Korea, Japan’s first lady, Akie Abe, updated her Facebook account on Monday - as Seoul and Tokyo announced details of the landmark deal - to announce that she visited the Yasukuni Shrine.

The controversial memorial honors the Japanese war dead, including 14 Class A war criminals, and any high-profile visit to the shrine has provoked ire from countries that suffered from Japanese colonialism or invasion, including Korea and China.

It was not Abe’s first visit to the Yasukuni Shrine. She visited the war memorial in May and August this year and announced both visits through the social networking media.

The timing of the latest visit was an obvious attempt to assuage conservatives in Japan who may oppose the comfort women deal.

The Park administration scrambled to calm the fury of the survivors and sell the deal to the public. Vice foreign ministers visited the former comfort women on Tuesday following a presidential message Monday evening to the nation to defend the deal.

In the message, Park stressed that it was the best deal the government could get taking into account time constraints. She said nine of the aged victims passed away this year alone, and only 46 are alive.

First Vice Foreign Minister Lim Sung-nam visited a shelter in Seoul operated by the Korean Council for the Women Drafted for Military Sexual Slavery by Japan and met with three survivors living there: Kim Bok-dong, Lee Yong-su and Gil Won-ok.

“Did you come here to tell us that you settled it? You should have met the victims first. Are you neglecting us because we are ignorant?” Lee asked. “Abe must issue an official apology and pay restitution under the law. You are saying it’s all resolved, but that makes no sense.”

Survivor Kim was particularly critical of Seoul’s agreement to note Tokyo’s dissatisfaction with a monument to comfort women located across from the Japanese Embassy in Seoul. The bronze statue of a girl, set up in 2011 by supporters of the comfort women, has become an international symbol of Japan’s wartime sexual slavery, and Japan has repeatedly demanded it be removed.

Korean Foreign Minister Yun Byung-se said Monday that Seoul acknowledged Tokyo’s concerns over the statue and the security of the embassy, and it will try to find an appropriate resolution by consulting with concerned civic groups. Following their meeting, Japanese Foreign Minister Fumio Kishida told Japanese reporters that it was his understanding that the statue would be relocated.

“Why are you moving it?” Kim said. “It’s not something our government or the Japanese government can discuss. That is our history built with small donations by the people. It makes no sense to move it.”

Lim tried to explain diplomatic interpretations of the deal to the survivors. “Although it is not satisfactory to restore your honor and dignity, the Japanese government made clear that it admits to responsibility, and Abe offered an apology and his remorse,” Lim said. “Although the agreement did not use the word legal restitution, we did our best to win the Japanese government’s admission of its responsibility, the state leader’s apology and follow-up measures. We did our best to find a resolution before time runs out.”

Lim then vowed to the victims that there will be an opportunity for Abe to offer his apology in his own voice rather than through his foreign minister, although he couldn’t say when.

Second Vice Minister Cho Tae-yul visited the House of Sharing in Gwangju, Gyeonggi, where 10 survivors are living. Of the 10, six survivors attended the meeting.

“We should have come before the negotiations, but Japan suddenly made a move on Christmas Eve before the holidays,” Cho said. “We could not come here to consult with you in advance, and I apologize for coming here belatedly.”

Cho said President Park had put consistent efforts into resolving the issue, though the deal may not be entirely satisfactory to all. “This outcome was possible because you made the first revelation 24 years ago and because of your persistent efforts,” he said. “We will do our best to implement the agreement to restore your honor and heal the wounds on your hearts.”

The survivors, however, criticized the government.

“We are the victims, but why does the government strike a deal recklessly?” Kim Gun-ja, 90, said. “We won’t accept this.”

Yu Hee-nam, 88, said she understands the government’s efforts, but still wants an apology and restitution under the law.

“I am not asking for a big treatment,” she said. “I feel very disappointed with the government.”

Another survivor, Lee Ok-sun, was particularly upset about the government’s failure to include the victims in the negotiation process. “The government stealthily reached a deal and is now trying to appease us,” she said. “The government sold us out. I want an official apology and restitution.

“We were never informed about anything, so how can you say we received an apology and compensation?” she asked. “The government lied to us, and the government is wrong.”

After listening to the complaints, Cho said he understood the women’s feelings. “The government tried to speak for the victims,” he said. “We did the negotiations with the belief that your pain is the country’s pain and your honor is the Korean people’s honor.”

Ahn Shin-kwon, director of the shelter, said the deal was a diplomatic collusion. “How can an agreement be made without the victims’ consensus?” he asked. “It could be unconstitutional, and the international community will never accept the agreement.”

The government said on Tuesday that the fund will be created by the end of June. “We will reflect the opinions of the survivors as much as possible when we negotiate with Japan on follow-up measures,” Cho said.

The main opposition party demanded Tuesday that the government renegotiate the deal. Rep. Lee Jong-kul of the main opposition Democratic Party, formerly known as the New Politics Alliance for Democracy, said Park presided over another humiliating deal with Japan, just as her late father Park Chung Hee did in 1965.

“The father and daughter absolved Japan twice for its colonial rule and inhumane crimes,” he said.

While the deal faced resistance in Korea, the United States, a key ally of both Korea and Japan, welcomed it.

“We support this agreement and its full implementation, and believe this comprehensive resolution is an important gesture of healing and reconciliation that should be welcomed by the international community,” U.S. national security adviser Susan Rice said in a statement issued by the White House.