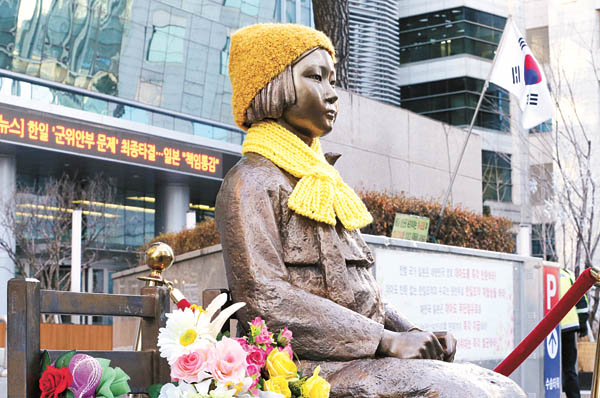 The Peace Monument, a statue of a 13-year-old girl representing the tens of thousands of former Korean sex slaves by the imperial Japanese military. [SHIN IN-SEOP]

A prominent nongovernmental organization that supports women forced to work in Japanese military brothels during World War II lashed out at Monday’s agreement between Seoul and Tokyo, stating it was “shameful” for the Korean government to succumb to its former colonial overlord’s demand to relocate a symbolic bronze statue across from the Japanese Embassy.

The Korean Council for the Women Drafted for Military Sexual Slavery by Japan, also known as the Korean Council, reiterated its stance on Tuesday that the government has no right over the Pyeonghwabi, or the Peace Monument, and that local authorities shouldn’t have let it be raised in negotiations with Tokyo.

Korean Minister of Foreign Affairs Yun Byung-se said on Monday during a televised statement to the public that Seoul will “acknowledge” Japan’s concerns over the monument in terms of the embassy’s safety and dignity, and that it will “negotiate with relevant organizations on how to deal with the issue.”

Yun did not explicitly say whether future negotiations could mean the relocation of the monument - something the Korean Ministry of Foreign Affairs flatly denied over the past weekend. But his counterpart, Fumio Kishida, told Japanese reporters later that day that he “understood that the statue would be relocated.”

When asked by local reporters whether he agreed to that decision, Yun said he thinks Kishida was doing “no more or less than expressing sheer hope” of the removal.

The life-size bronze statue of a 13-year-old girl in traditional Korean attire represents tens of thousands of women forced to work as sex slaves, euphemistically referred to as “comfort women.”

The Korean Council received funds from the public and set up the statue on Dec. 14, 2011, to mark the 1,000th demonstration it hosts every Wednesday in front of the embassy.

The Peace Monument is a “living historical emblem” and a part of “public property,” the Korean Council stressed through a statement.

“The Korean government can’t interfere and go about saying it would remove or relocate the monument,” it continued.

Surviving victims chimed in and remonstrated with First Vice Foreign Minister Lim Sung-nam about the issue on Tuesday when he made a brief visit to a shelter run by the Korean Council.

Lee Yong-soo, one of the most vocal survivors, pledged to establish similar monuments “all over the United States” and in “the middle of Tokyo.”

Controversy over the Peace Monument recently made headlines when Takeo Miyazaki, a correspondent for the Japanese daily the Yomiuri Shimbun, quoted a “source related to the South Korean government” in an article published last Saturday.

In an article titled “Statue relocation considered,” the journalist wrote that Seoul was “considering moving the statue” and that Tokyo had sought that promise “as a condition for resolving the comfort women issue.”

“A park scheduled to be constructed on Mount Namsan in Seoul” was mentioned as the alternative spot.

Korea’s Ministry of Foreign Affairs announced later the same day that the government wasn’t in a position “to say this or that” about the monument “because it was voluntarily set up by the public.” It is “preposterous reporting” that Seoul is considering to relocate it to Mount Namsan, the ministry said. The Peace Monument, a 130-centimeter (4-foot-3) representation of a teenage girl seated on a chair, is placed just several meters away from the Japanese Embassy in Jongno District, central Seoul.

Only a narrow street sets it apart from the main building. Jointly designed by two Korean sculptors, the girl’s bare feet represent the comfort women’s feelings of loss, while her firmly clenched fists show rage against the Japanese government. A bird, which is supposed to be a communication channel between the public and former sex slaves who passed away, sits on the girl’s left shoulder.

An empty chair adjacent to the girl was designed to offer a place from which visitors could relate to the survivors and empathize with their pain.

Her eyes stare straight toward the embassy’s entrance, forcing Japanese diplomats to make visual contact with her as they leave their offices.

A total of 31 similarly shaped Peace Monuments have been erected nationwide, with two more in the United States and one in Canada. The Japanese government has long pressed Seoul to remove the statue, asserting it was a violation of the Vienna Convention’s requirement that diplomatic missions should be protected from “any disturbance of the peace of the mission or impairment of its dignity.”

Korean activists have used it as a tool to publicize Japan’s wartime atrocities, and how it has consistently denied offering a legitimate apology to victims. At least 30 police officers and five police buses were dispatched on Tuesday near the Japanese Embassy as activists played the guitar and sang songs dedicated to the victims.