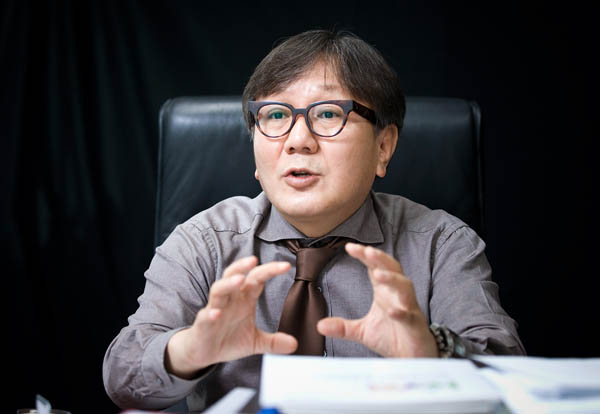 Song Sung-gak, president and CEO of the Korea Creative Content Agency, says cultural content developed by businesses outside Seoul should aim for global consumers from the start. [KWON HYUK-JAE]

There used to be a saying in Korea that “if you wanted to succeed, go to Seoul.”

But that’s exactly the kind of mindset that Song Sung-gak, president and CEO of the Korea Creative Content Agency (KOCCA), is trying to change.

“What we hope to do is foster a culture industry where the young generation can work all across the country, without having to move to the capital,” Song said in a recent interview with the JoongAng Ilbo. “That is why we need to discover cultural content that will work not only in regions outside Seoul, but also in Seoul and globally.”

This year, the institution spent most of its budget on supporting about 20 cultural projects, such as a media facade projected onto the Jeondong Catholic Cathedral in Jeonju, North Jeolla; a performance inspired by the prehistoric Bangudae petroglyphs in the southeastern city of Ulsan; and webtoons. Most of the projects involved collaboration between the KOCCA and local businesses.

To further help businesses based outside Seoul, the institution also held an event to showcase and promote new Korean culture-related media and technology developed by businesses in about 39 regions.

The event, titled “Glocal Content Fair 2015,” was held at Kintex in Ilsan, Gyeonggi, in October. The word “glocal” is a portmanteau of global and local created by the fair’s organizer.

Song’s logic is quite simple. Because Korea is a relatively small country and the size of domestic consumption is not that large, cultural content developed by businesses outside Seoul should aim for global consumers from the start and make inroads into the global market.

And with that, the KOCCA can help with its already-established international networks and encourage investment from foreign companies.

But Song emphasized that for cultural content developed by a regional company to succeed, the content should contain both the region’s individuality, as well as universality that can appeal to people outside the region - which is not easy.

As for advice for content creators, the 57-year-old said businesses should think outside the box and be open to crossing between different cultural genres and industries.

“For instance, ‘Vivid Sydney’ first began as a festival of LED lights,” he said. “But later, it also took on elements of music, advertising and other industries. Today, it has become a favorite of tourists.”

Vivid Sydney is an 18-day festival of light, music and ideas held in Sydney, Australia, every year.

As for his and the KOCCA’s ultimate goal, Song said “balanced growth.”