2015 was just fine for some industries, awful for others

2015 was just fine for some industries, awful for others 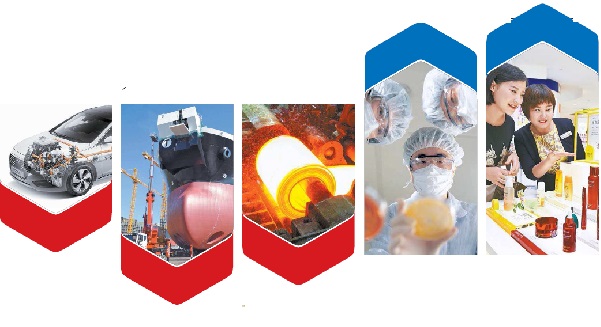 The year 2015 was marked by the stellar performance of pharmaceuticals and cosmetics companies.

While cosmetics companies took the crown as a star performer for the third year in a row, the pharmaceutical sector had a breakthrough year due primarily to a series of big licensing deals.

Four out of the top 10 players with the greatest gains on Korea’s Kospi were pharmaceutical companies this year.

Hanmi Pharmaceutical, the country’s top drug maker, grabbed the limelight for its record deals. In November, the company announced the biggest license contract in Korea’s pharmaceutical industry as it entered into an agreement with French drug maker Sanofi to license the Korean company’s diabetes solutions portfolio in development for up to 3.9 billion euros ($4.2 billion).

“In 2015, Hanmi Pharmaceutical contributed to increasing the local pharmaceutical industry’s competitiveness on the global stage through large-scale deals,” said Seo Keun-hee, a researcher at Daishin Securities.

“The achievement will have a positive impact on the overall industry, enhancing confidence in local pharmaceutical companies,” the researcher said.

Only a week after the mega deal, the company went on to sign a licensing agreement worth $915 million with U.S. pharmaceutical giant Janssen Pharmaceuticals for the development of a drug that can be used to treat both diabetes and obesity.

Hanmi has tried to develop novel drugs instead of churning out “me too” products. 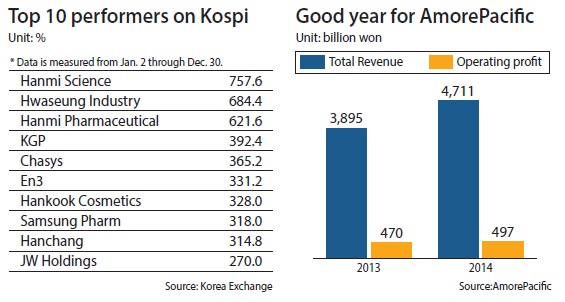 Hanmi brought in a record operating profit in the third quarter and is on track to generate record annual profit and revenue.

Biotech companies also achieved several milestones as expectations mount over the potential of the sector.

The sector is considered promising especially after Samsung Group declared the bio business as the next growth engine.

The 850 billion won ($725 million) facility will become the company’s third biopharmaceutical manufacturing plant when it begins operating in the fourth quarter of 2018.

BioLogics was founded in 2011 as a joint venture with the global biopharmaceutical company Quintiles.

The biotech unit and another Samsung biotech company that specializes in similar products, Samsung Bioepis, said their goal was to make Samsung No. 1 in world biomedical and pharmaceutical manufacturing within five years.

Samsung Bioepis is planning to sell its “biosimilar” products next year and will list on the Nasdaq in the first half of 2016.

Celtrion, a local producer of biosimilars, is also a leading player in the biotech and pharmaceutical area.

The company filed a request for approval from the European Medicines Agency in November for a biosimilar of rituximab, the best-selling anticancer drug in the world. Should the company win approval, the drug will be its second biosimilar after Remsima, a drug for rheumatoid arthritis. 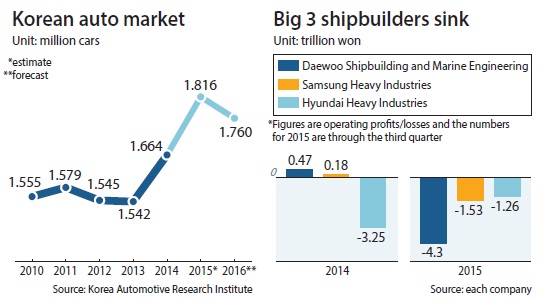 Beauty companies continued an upward streak this year despite unfavorable external conditions such as the outbreak of Middle East respiratory syndrome (MERS) and a slowing economy in China.

Since Chinese consumers are a driving force of Korean cosmetics sales, anything that negatively affects demand in China or among visiting Chinese deals a huge blow to the performance of cosmetics companies.

Overseas shipments of K-beauty products shot up an average 53 percent from January to September this year, compared to the same period last year, according to the Korea Chamber of Commerce & Industry.

The IT business was more of a mixed bag. The semiconductor business of Samsung Electronics and chip maker SK Hynix showed healthy growth in revenue and profit throughout the year. But the performance in consumer electronics and the lucrative smartphone business was not as impressive as before.

Samsung Electronics remained the top smartphone seller based on units as of the second quarter, but it suffered a decline in market share compared to the same period last year, according to preliminary data released by market tracker IDC, which is the latest data available.

Local automakers were expected to have a tough year due to fierce competition with foreign brands and the slumping economy in China. Despite such worries, Korean consumers were able to see many new cars. Foreign automakers aggressively trying to expand their shares in the local market, such as BMW and Audi, brought in many new cars, and domestic brands rolled out new models earlier than scheduled in response. Such moves positively influenced the market as car sales in Korea increased by about 10 percent from a year ago, thanks to SUVs such as Ssangyong Motor’s Tivoli, Hyundai Motor’s Tucson, GM Korea’s Orlando and the QM3 of Renault Samsung.

According to industry data, the five Korean carmakers - Hyundai Motor, Kia Motors, GM Korea, Ssangyong Motor and Renault Samsung - have sold a total of 1,082,059 cars from January to November, an 8.3 percent rise from a year ago. The total figure increases to 1,261,298 when sales for imported cars are added, and represents a 10.3 percent year-on-year rise in sales.

Among the five companies, the nation’s smallest automaker, Ssangyong, was the one that grew most in terms of sales in the domestic market, thanks to its small Tivoli SUV. The company sold a total of 88,313 units during the period, a 45.3 percent rise from a year earlier. Kia Motors sold 363,912 units, up 13.6 percent from a year ago, and Hyundai Motor sold 457,462 cars, up by 2.9 percent.

“Local automakers need to focus more on qualitative growth rather than just selling more cars,” said Park Hong-jae, head of the Korea Automotive Research Institute. “It looks like Hyundai Motor has launched the luxury Genesis brand [which the company expects to improve its profitability] at the right time.”

The Volkswagen emissions-rigging scandal didn’t impact the Korean market much. Sales of Volkswagen plummeted for a short period, but Volkswagen became the best-selling foreign brand in November, thanks to a series of aggressive discount promotions.

Foreign brands led by German automakers such as BMW, Mercedes-Benz and Audi had their best year ever. From January to November, a total of 219,534 imported cars were registered, which is a 22.5 percent rise year-on-year, and the figure is expected to hit over 230,000, an all-time high in the market. According to industry data, foreign automakers made 10.2247 trillion won in revenue from January to November, which is even bigger than the total export made by the nation’s bottom three automakers - GM Korea, Renault Samsung and Ssangyong Motor (8.9047 trillion won) during the same period.

This year’s shipbuilding industry can be summarized in two terms: offshore plants and restructuring.

The offshore plant business was once considered a new growth engine for Korean shipbuilders, most of which already realized they could no longer thrive on ship manufacturing. But the companies, particularly the so-called big three - Hyundai Heavy Industries (HHI), Daewoo Shipbuilding & Marine Engineering (DSME) and Samsung Heavy Industries (SHI) - started reporting terrible earnings last year due to wobbles in the high-risk offshore plant business.

The world’s No. 1 shipbuilder, HHI, said it made a 3.2492 trillion won operating loss last year and continued to report billions of won in operating losses in the first three quarters of this year. DSME, which bragged last year of billions of won in operating profit, found that it wasn’t fully reflecting its losses from the offshore plant business. After Jung Sung-leep was named the new CEO in May, he ordered a check on the overall financial condition. The company then reported 3.0318 trillion won of operating loss, mainly due to struggles in the offshore plant business.

As HHI and SHI continued to report losses in the past three quarters, the total losses made by the big three was 7.3246 trillion won as of November, and the amount could increase even more with the fourth-quarter earning reports for the three.

In the offshore plant business, the big three mostly signed package deals known as EPC, in which shipbuilders manage the entire process of engineering, procurement and construction. The Korean companies are the best at the construction part, but weren’t competitive in the engineering of the offshore plants. Clients frequently changed plans, including facility designs. Many of the projects couldn’t meet their deadlines, and unexpected additional costs were generated.

The big losses are leading to large-scale restructuring. HHI made a generational shift as it cut 25 executives and promoted 37 young employees in their 40s and early 50s as executives. It also tried to improve its finances by selling its shares in Hyundai Motor worth about 500 billion won and its own shares worth 130 billion won earlier the month. DSME cut 30 percent of its executives, and the surviving executives foreswore 10 to 20 percent of their salaries. The company aims to reduce its size by 30 percent and will accept voluntary resignations from 300 workers.

“One key to overcoming recent hardships is to improve the overall technology level, since orders will increase in the environmentally-friendly shipbuilding sector due to tightened regulations,” said Prof. Kim Young-hoon of Kyungnam University’s naval architecture and ocean IT engineering department.

It is hard to find good news in the Korean steel industry.

The nation’s leading steelmaker, Posco, saw its former chairman, Chung Joon-yang, investigated and indicted for corruption and has been trying to improve its financial conditions since last July under the leadership of a new chairman, Kwon Oh-joon. Due to a slump in the industry, mainly due to an oversupply of low-price Chinese products, Posco reported 210.1 billion won in net losses last year and also reported 658.2 billion won of net losses in the third quarter with struggles by chemical and material affiliates.

Posco will reduce the number of its 47 affiliates in the country by 50 percent through 2017.

The construction industry also had a gloomy year, particularly in the global market. Impacted by low international oil prices, wealthy clients in the Middle East made fewer orders, and Korean builders only booked $46.1 billion won worth of contracts this year, a 30 percent drop from a year ago.