FSS forces firms with large debt loads to get a grip

FSS forces firms with large debt loads to get a grip 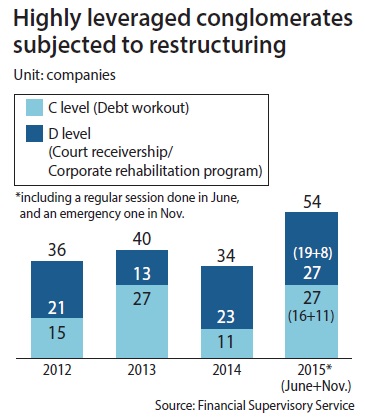 About 20 trillion won ($17 billion) in bad corporate debt has weighed down the Korean economy since the 2009 global financial meltdown, putting as many as 54 large companies on the government’s restructuring table.

The Financial Supervisory Service (FSS), a market watchdog, announced on Wednesday that a total of 54 highly leveraged conglomerates have received a C or D level in two credit risk assessments held this year, up 59 percent compared to last year’s 34. The 54 companies’ debt amounted to 19.6 trillion won as of November.

Right after the 2009 financial meltdown, 65 local conglomerates were subjected to restructuring in 2010, with debt worth 16.7 trillion won.

The latest announcement is the result of an emergency credit risk test by the FSS in November on some 368 local conglomerates that borrowed 50 billion won or more from local commercial and state-run banks. This followed a regular test session in June. Thirty-five conglomerates that were labeled insolvent in June have already undergone some form of restructuring.

“The FSS usually makes an assessment only once in the first half of every year, but this year, it decided to hold a second evaluation in November with strengthened evaluation criteria in order to proactively react if companies on the verge go insolvent in times of external uncertainties,” Yang Hyun-keun, a deputy governor of banking and non-banking supervision at the FSS, said at a press conference.

In the emergency assessment, the FSS found a total of 19 conglomerates needed debt workout programs or court receivership. Of those, 11 received a C level and eight were at the D level.

The list includes three listed companies, two in the C level and one in the D level. One of the three is DongA One, a flour production company whose creditor, Korea Development Bank (KDB), decided on Tuesday to go for a workout program, the FSS said.

It is assumed that Daewoo Shipbuilding & Marine Engineering (DSME), whose creditor KDB decided to inject emergency funds in October, and Hyundai Merchant Marine, which is currently preparing for a self-restructuring plan, received higher marks than C.

The FSS notified all creditors involved with the 19 companies of the results. Of the 11 companies required to go into debt workout programs, four already applied for restructuring and another is getting ready to apply by today. The other six companies are unclear if they will be able to finish applying for one by today.

Following the workouts and court receiverships, the lenders will have to inject an additional 1.5 trillion won into the 19 companies, the FSS estimated.

Local banks and other financial companies have so far lent a total of 12.5 trillion won to the 19 insolvent conglomerates.

After injecting the additional money, the average Bank of International Settlements capital adequacy ratio of local banks is estimated to drop by 0.1 percentage points to 13.89 percent, while that of savings banks are expected to decline by 0.02 percent to 14.31 percent.

To start a workout or corporate rehab program, the insolvent companies have to hurry considering the situation at the National Assembly.

The Corporate Restructuring Promotion Act, which offers legal shortcuts in cases of voluntary corporate restructurings for insolvent companies, is currently in place but is scheduled to phase out today. The government submitted a bill to extend the act by a few years, but it has been held back by lawmakers.

FSS Chief Zhin Woong-seob called for 17 commercial banks’ vice chiefs on Wednesday to prepare enough cash to be injected into these companies. Zhin also requested the banks’ cooperation as creditors to agree on workouts or corporate rehab programs as soon as possible, as the Restructuring Promotion Act is most likely to end its life on Jan. 1, 2016.

“I hope creditor banks actively participate in the voluntary agreements so that the restructurings go well without the Restructuring Promotion Act,” Zhin said at the conference with the bankers. “Failing to pass the Act forces the at-risk companies to individually convince creditors to agree on starting restructuring processes, which still is difficult in Korea as a voluntary agreement among the creditor banks is not compulsory.”

Back in 2006, Hyundai LCD, VK and Pantech pushed for a workout with creditors’ voluntary agreements, but the attempt failed after some creditors refused to cooperate, he emphasized.

Besides the 54 insolvent companies subjected to restructurings, there are companies that passed the FSS credit assessment but remain on the verge of becoming insolvent. Of them, 23 conglomerates have already started voluntary restructuring plans, such as capital increases, M&As, sell-offs or supporting affiliates, the FSS added. The regulator promised it will hold regular monitoring sessions on their programs.

Concluding that the corporate debt issue would pose a serious threat to the economy next year with additional interest rate hikes by the United States Federal Reserve, the government came up with a series of plans for industries in trouble.

The government will create a $1.2 billion fund with private entities in order to salvage the struggling shipping businesses.

The Ministry of Strategy and Finance and Financial Services Commission (FSC) on Wednesday decided to launch the fund starting with $1.2 billion, but will expand the size in response to market demand. Among the initial capital, 40 percent will be funded by state-run financial institutions including Korea Development Bank, Export-Import Bank of Korea, Korea Asset Management Corporation and KDB Capital. Some 10 percent of the fund will be from shipping companies. The remaining 50 percent will be supported by private financial institutions on guarantees of the Korea Trade Insurance Corporation.

To tap into the government-led fund, companies must have restructuring plans on their own, including the selling of profitable assets. They should also keep their debt ratios below 400 percent.

The government decision comes amid a weak shipping market across the globe. With global trade volume having fallen nearly 11 percent, shipping companies saw the volume of shipments decrease, while the technology to build larger vessels has caused freight fees to slide.

Korean shippers have been struggling to survive. As profitability has eroded, they could not invest in more efficient or eco-friendly vessels, and their cost competitiveness also eroded.

Judging that there are limits in the current corporate restructuring process led by creditor banks, the government came up with the idea of the fund for shippers.

“Due to structural problems in the global shipping market, there is no way out for domestic shippers,” an FSC official said.

For the petrochemical industry, the government will induce companies to cut 30 percent (1.5 million tons) of their production capacities based on a judgment that the terephthalic acid market is in oversupply.