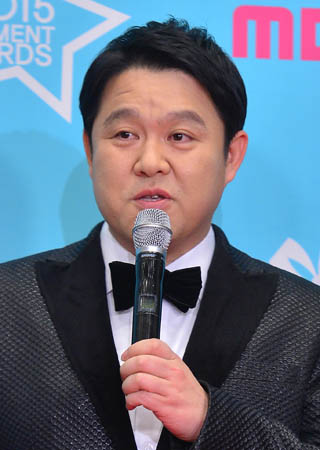 Kim had been nominated for the grand prize along with comedian Yoo Jae-suk of the popular reality TV show “Infinite Challenge.”

It was the first grand prize for Kim in his 22-year career.

“I would say this is the happiest moment of my life. I always have been a troublemaker, but I could get this award all thanks to you,” Kim said.

The 45-year-old continued, “Still, a majority of people criticize the way I host TV shows, and some feel uncomfortable seeing me on TV, but I will reflect on my wrongdoings for the rest of my life.”

Kim is hosting five TV shows, including “Radio Star” and “King of Mask Singer,” on MBC alone. He is also appearing in other TV shows, such as “It’s Okay” and “Mr. Baek the Homemade Food Master.”

Kim debuted in 1993 as a comedian, but he spent more than 10 years as an obscure comedian. During those days, Kim hosted an Internet radio show with fellow comedians.

Kim began to gain recognition for his catty remarks starting in the mid-2000s, but his past Internet radio shows still haunt him.

Comfort women is a euphemistic term for women who were forced to work for Japanese military brothels during World War II.

Meanwhile, numerous K-pop acts were honored at the annual entertainment awards. Minho of the K-pop group Shinee received the Popularity Award for hosting the music show “Show! Music Core,” and Yook Sung-jae of BTOB received the Newbie Award for his appearance in the reality TV show “We Got Married.” Yook and his fictional partner Joy from girl group Red Velvet earned the Best Couple award, too.