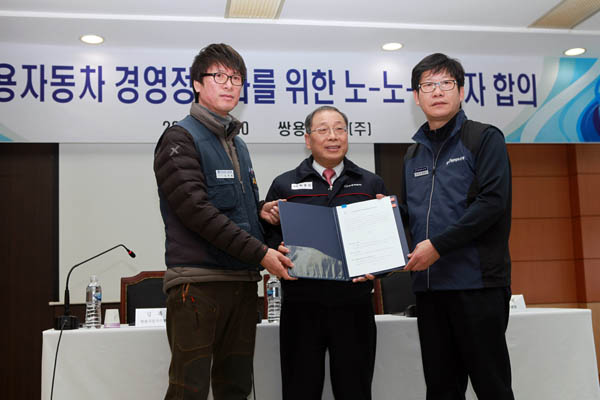 Ssangyong Motor has decided to bring back all the workers it fired six years ago following a company restructuring. The nation’s smallest automaker announced Wednesday that the company and unionized workers had agreed to rehire in stages all the employees who had previously been let go.

The agreement is likely to put to an end to issues that have plagued the company automaker since 2009, including a slew of damage suits, and finally normalize management.

The decision was approved at a board meeting held at the automaker’s plant in Pyeongtaek, Gyeonggi.

The two sides have not revealed the details, but Ssangyong reportedly plans to initially rehire six fired workers next month and hire the others in stages.

A spokesman for Ssangyong told the Korea JoongAng Daily that “by stages,” the company meant that the workers would come back in waves over the coming months and that a designated committee would “discuss how many people the company would rehire at a time.

“It hasn’t been decided when the entire process will be finished,” he said.

The company added that it will also raise funds to help the families of the workers who died during subsequent protests and that it would drop the lawsuits filed against the protesters if they dropped all the suits against the automaker.

In 2009, the automaker announced it was letting go a total of 2,614 workers as it was placed under court receivership due to financial hardships; about 1,900 left the company through a so-called voluntary resignation system; 455 went took unpaid vacations, while 179 people who opposed the restructuring were fired.

The company’s labor union opposed to the restructuring illegally occupied the Pyeongtaek plant, staging a protest for 77 days. The 455 employees who took unpaid vacations went back to the company in March 2013. Most of the 179 fired workers have been fighting against the company to be rehired and that resulted in 28 people, including employees and their families, taking their own lives or dying due to illness.

A visit by Anand Mahindra, the chairman of Ssangyong’s No. 1 shareholder, the Mahindra Group of India, sparked hope for progress when he met with labor union leaders on Jan. 14.

The company subsequently formed a consultation group to discuss rehiring the workers who were let go, normalizing management, how to manage legal cases involving both sides as well as a plan to support the families of the workers who died.

The two sides reached an agreement in October over how to financially support the workers’ families and normalize operations after 32 rounds of talks and eventually reached a tentative deal on re-employment on Dec. 11.

“Wrapping up this restructuring issue, which has served as the biggest obstacle for the growth of the company, has been very meaningful,” said Choi, the CEO. “I think this will definitely be a chance for Ssangyong Motor to start new.”

“We will now focus on healing each other’s scars and the union will do its best to make sure this agreement is realized as planned,” said Hong, the head of the workers’ union.