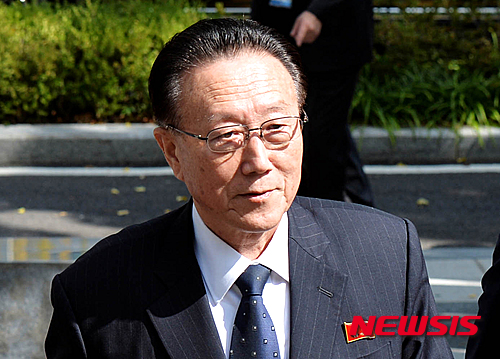 Kim Yang-gon, North Korea’s top man in charge of inter-Korean relations, died in a car crash on Tuesday. He was 73. The North’s state-run Korean Central News Agency reported Wednesday that Kim Jong-un’s “closest comrade, a solid revolutionary partner” was killed in a car wreck at 6:15 a.m. on Tuesday without giving more details of the accident. North Korean leader Kim will head a state funeral committee comprised of 69 members.

The state funeral for Kim will be held on Thursday.

The late Kim, Pyongyang’s point man on handling ties with South Korea as head of the United Front Department, was one of the two senior officials dispatched by Pyongyang for talks at the border village of Panmunjom in August and faced off National Security Director Kim Kwan-jin and Unification Minister Hong Yong-pyo. The marathon talks concluded in a six-point agreement that defused escalating tensions on the peninsula that brought the two sides on the brink of an armed conflict along the heavily fortified border.

Among the 80 funeral committee members is Choe Ryong-hae, known as a confidant to Kim Jong-un but recently was reported by the South Korea’s intelligence agency to have been removed from power, in an indication of his return to his official position. Choe was with

Kim Yang-gon when he visited Incheon last year to attend the closing ceremony of the Incheon Asian Game.