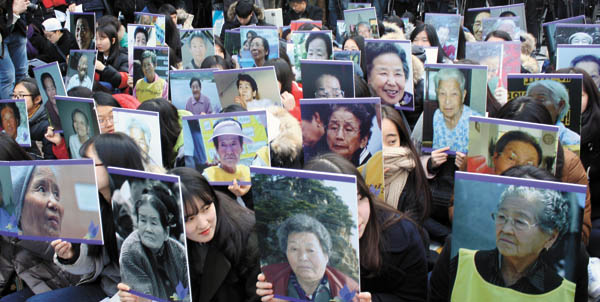 Participants hold portraits of Korea’s deceased “comfort women,” who were forced to serve as sexual slaves for the Japanese military during World War II, at a weekly rally on Wednesday in front of the Japanese Embassy in Seoul. The rally was partly in protest of the agreement between Seoul and Tokyo over the comfort women issue. [OH BYUNG-JOO]

Public rage came to a head on Wednesday, following a landmark deal between Seoul and Tokyo regarding the Japanese military’s sexual enslavement of Korean women during World War II, as Japan boasted a diplomatic victory in a series of provocative media reports.

The right-wing Sankei Shimbun quoted Japanese Prime Minister Shinzo Abe earlier this week as saying that the long-running bilateral dispute over Korea’s “comfort women” - the tens of thousands of young women and girls forced into Japanese military brothels during World War II - had ended for good.

Tokyo, it added, will not apologize anymore.

On Monday, the foreign ministers of both countries announced the agreement, in which Japan offered an official apology and a fund worth 1 billion yen ($8.3 million) for the victims.

The settlement is “final and irreversible,” they said, as long as Tokyo faithfully follows through with its promises.

“As of yesterday, everything ended. We won’t apologize anymore,” the conservative newspaper quoted Abe as telling his associates on Tuesday. “In the future, we will never talk about this issue. We will make no mention of it at the next Korea-Japan summit.”

The newspaper went on to say that the prime minister had already informed President Park Geun-hye about Japan’s stance. “If Korea breaks the agreement, its status as a member of the international community will also end,” the paper quoted Abe as saying.

According to the Sankei Shimbun, Korean Foreign Minister Yun Byung-se confirmed in a televised media conference that the deal was irreversible and that the United States supported it.

“This means Korea will have to fix the goalpost that it has moved around until now,” Abe was quoted as saying.

On Tuesday, the prime minister met with Japanese Foreign Minister Fumio Kishida, who briefed him on the negotiations, the newspaper said, and praised him for getting Yun to confirm the settlement as “final and irreversible.”

Another Japanese newspaper also reported on Wednesday that the Korean government had agreed to relocate a controversial monument in front of the Japanese Embassy in Seoul before Tokyo provides the funds.

Quoting senior Tokyo officials, the Yomiuri Shimbun reported that Japan had demanded the bronze statue of a girl, symbolizing the comfort women, be moved as soon as possible and that Korea had responded positively.

According to the Asahi Shimbun, Japan demanded the statue be removed in return for the money, to which Seoul unofficially agreed.

The decision enraged the Korean public, particularly the surviving victims, though the Korean government has insisted that it never agreed to move the statue.

The wartime survivors made clear that they would not accept the settlement unless Japan admitted to its legal responsibility and condemned the Korean government for neglecting them in the negotiation process.

The Park administration struggled to calm public rage, though the president currently has no plans to visit the elderly comfort women. Asked about a possible meeting with the survivors, presidential spokesman Jun Youn-kuk said on Wednesday that it was not being considered.

He added that the agreement must be faithfully and speedily implemented. “This should serve as an opportunity to start a smooth cycle of trust,” he said. “Both sides need to put in effort.”

Meanwhile, the main opposition party on Wednesday lambasted the agreement as invalid.

“This humiliating deal was a devastating outcome to Park’s [diplomatic stance] that the comfort women issue be resolved in order to facilitate the improvement in Korea-Japan relations,” said Moon Jae-in, chairman of the Minjoo Party, formerly known as the New Politics Alliance for Democracy. “The deal amounts to a treaty in which the people’s rights are surrendered, so it must be ratified by the National Assembly. Since the legislature didn’t approve it, this is invalid.”

Moon went on to argue that no one, not even the president, could speak about “final and irreversible” closure except for the survivors.

The party’s floor leader, Rep. Lee Jong-kul, also said on Wednesday that it would recommend that the president fire Yun. The party, he added, will also demand that the government renegotiate the deal.

Rep. Choung Byoung-gug, a four-term lawmaker, said on Wednesday that it was regretful that the government had failed to communicate with the survivors during the negotiation process.

“You can say the issue is settled only when the survivors accept the settlement,” he said. “The government must actively communicate with them from now on to implement the deal.”

Rep. Na Kyung-won, head of the foreign affairs committee in the National Assembly, added that the government lacked the foresight to seek understanding from the survivors in advance.

It is regretful, she said during an interview with MBC Radio, that the agreement mentioned removing the statue in front of the Japanese Embassy in Seoul, but that it should not be interpreted as a promise by Korea to do so.