Baidu zeroes in on Korean market with app

Baidu zeroes in on Korean market with app 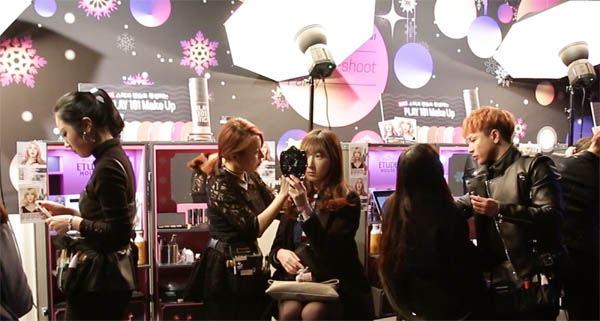 Visitors receive makeup tips at “#LookPhotoWonderful Christmas Party” co-hosted by Baidu and Etude House on Dec. 23 at a cafe in southern Seoul. [BAIDU]

Baidu held a Christmas event with Korean cosmetics brand Etude House last week - a sign of the growing presence of Chinese IT companies in Korea.

Baidu’s “#LookPhotoWonderful Christmas Party” was held at a cafe in Apgujeong, southern Seoul, to promote its photo-taking app Photo Wonder. It is the first time the giant Chinese search engine visited Korea to hold an official event.

“Since Korea already has a high Internet penetration rate and advanced technologies in the IT sector, we looked for different approaches and one was through our app, Photo Wonder,” said Josh Fenn, a senior marketing manager of Baidu. The company’s major targets have been its domestic market and emerging markets showing steep growth in Internet-related businesses.

Photo Wonder is already one of the top five photography apps in Korea. It provides photo editing tools like collages, image stickers, filters and beautifying and slimming functions. While it has 200 million users worldwide, Korean users account for 41 percent of the app’s total consumer base. That is larger than in China, which only accounts for 15 percent, followed by Vietnam, Thailand and the United States.

“Though it’s quite a mature market, I think Korean consumers’ interest in the beauty and health care sector including photo-taking accounted for the popularity of the app,” said Yvonne Ng, global marketing manager of Baidu. “The collaboration with Etude House was a good opportunity for us since it is a well-renowned cosmetics brand and its concentration on beauty relates to our app.”

Etude House, which entered the Chinese market in 2013, welcomed Baidu’s invitation to hold a joint event. “A marketing collaboration with a renowned Chinese company seemed beneficial both in the Korean and Chinese markets,” said a spokesman from Etude.

During the event, Baidu offered on-the-spot photo printing, and Etude House provided makeup demonstrations offering tips on the best use of makeup for photos.

Baidu said it aims to expand its presence in Korea following feedback on the Christmas event. “This event marks an exciting chapter of our business and we are open to offers for further collaborations with Korean companies,” Ng said.

Baidu is one of the three biggest IT companies in China along with Alibaba and Tencent, although each specialize in different businesses.

Baidu’s recent focus is on a group buying platform recently established in China and also apps for emerging markets.