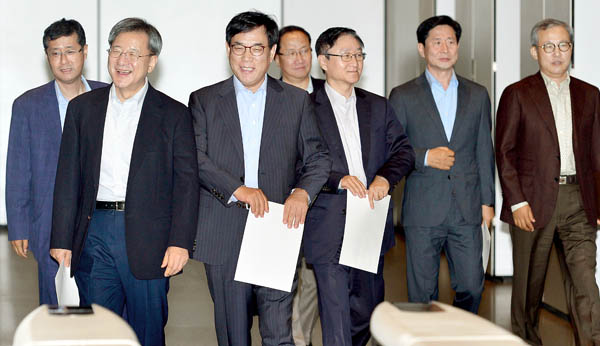 A group of Samsung presidents walk out of Samsung Electronics’ Seocho headquarters in southern Seoul on Oct. 7, after a weekly Wednesday lecture. [JOONGANG ILBO]

At 6:20 a.m. on Dec. 23, a chain of black sedans arrived at Samsung Electronics’ Seocho headquarters in southern Seoul. Inside those cars were the presidents and CEOs of Samsung affiliates on their way to the last weekly presidential-level meeting of the year.

The 52 top executives, including Kwon Oh-hyun, the vice chairman and CEO of the Device Solutions Division, gathered together to hear a lecture by poet Chung Ho-seung. He talked for 90 minutes about the poems that inspired him. The lecture was followed by a brief discussion.

Samsung has maintained a tradition of holding a meeting with guest lecturers at 8 a.m. every Wednesday since founder Lee Byung-chull started it in 1973. In the beginning, the lectures were held every Tuesday. It was such a gathering that unanimously endorsed Lee Kun-hee, Lee Byung-chull’s third son, as the new chairman when the founder passed away in November 1987.

Samsung pressrooms are packed with reporters each Wednesday morning. Reporters can buttonhole guests on the way in or out and are given a briefing about the lectures, which gives them a sneak peek into what the managers of Korea’s top conglomerate are most interested in. Of the 48 meetings held this year, 12, or 25 percent, dealt with bio-science or future technologies involving robots or the Internet of Things (IoT) - fields that Samsung has chosen as its growth drivers over the coming decades.

Guest lecturers have diverse backgrounds and include professors, scientists, artists and writers. Topics covered ranged from trends in Korean society to the reunification of the Korean Peninsula and Niccolo Machiavelli, the Italian Renaissance politician and historian.

Son Young-kwon, president of the Samsung Strategy and Innovation Center (SSIC), was the one and only insider invited to speak last year. Having led the center in Silicon Valley since 2012, Son emphasized the importance of an open business model.

“You need to be open to external ideas and technologies in order to become an innovator,” he told the Samsung presidents.

Earlier, Son came up with a blueprint for Samsung’s IoT strategies and spearheaded the development of Artik, a family of modules tailored for IoT that was unveiled in May. Artik is an open platform like Google’s Android, allowing outside developers to adopt programs for it freely so Samsung can raise the size of its IoT ecosystem.

Kim Dae-shik, a brain science expert and a professor of electrical engineering at Kaist, spoke in April.

In July, it was the turn of Dennis Hong, a U.S. expert in humanoid robotics. August saw Oh Jun-ho, a professor of mechanical engineering at Kaist. Those lectures emphasized Samsung’s growing interest in robotics and artificial intelligence.