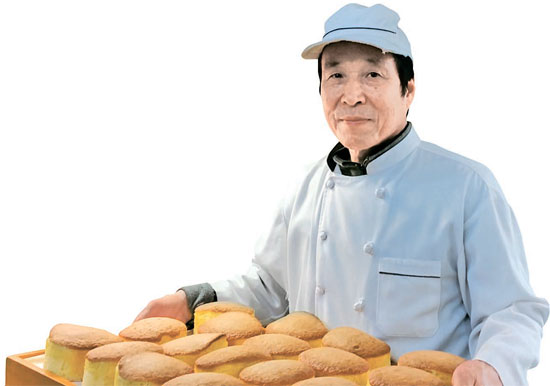 Jeon Seo-bong, 70, closed down Donggeurami Bakery in Jeonju, North Jeolla, this week. The establishment served as an area staple for 60 years. [JANG DAE-SUK]

Last weekend was a milestone for Jeon Seo-bong, 70, who owns Donggeurami Bakery in Jeonju, North Jeolla. On Dec. 27, he baked his last loaf of bread and closed his doors for good four days later.

Jeon made the decision because he was reaching retirement age, but also, he said, because he couldn’t handle the competition with bigger franchises.

“It is getting harder to compete with larger bakeries,” he said. “I also thought it was about time to retire since my children have all grown up. Of course I feel sad about closing my bakery - it’s been my life - but I came to that decision after a long deliberation.”

For 60 years, Donggeurami Bakery has kept its place on Jeonju’s Movie Street. The Bakery is one of the area’s most famous sites and is often frequented by foreign tourists, who mostly visit in May during the Jeonju International Film Festival.

This bakery was especially popular in the 1980s and ’90s. The business was so crowded that, in fact, Jeon didn’t even have time to prepare bread for the next day. Renowned entertainers like Nam Jin, Ha Chun-hwa and Lee Eun-ha also visited the bakery when they had performances nearby.

During the film festival, fans used to line up around the bakery to catch a glimpse of the celebrities and directors who visited.

Early in the morning on Dec. 27, Jeon made his way out to open the bakery and began to knead the dough for his last batch, finishing by 3 p.m.

He gave the bread and cookies that he baked with care to his acquaintances and after selling his supply, he finally shut the door to the 60-year-old business.

He learned to bake when he was just 19 years old and built his career working at popular bakeries in Jeonju, including the Taegeukdang Bakery, the Hanyang Bakery and the Ewhadang Bakery, before finally acquiring his own.

Except when he was ill, Jeon rarely stopped working. Even during national holidays, he continued to bake.

“I want to be remembered as a baker who did his best for his staff,” he said. “I regret that so many bakeries have to shut their doors. Only about a third of bakeries make it through.”

Jeon added that for businesses to stay open long term, cooperation among the central and local governments and the country’s professional bakers is necessary.