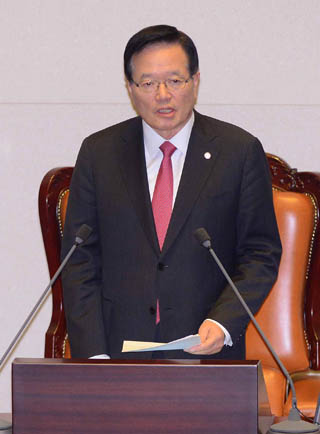 National Assembly Speaker Chung Ui-hwa indicated on Thursday that he would submit a constituency draft that would conform with the existing electoral map to the National Election Commission after midnight on Friday in case the two main parties fail to reach a compromise.

The draft Chung said he would submit in the absence of a bipartisan agreement on the issue would contain the same number of district seats at 246, and 54 proportional seats.

Chung’s notification follows a series of botched talks between the ruling and opposition parties to finalize a new electoral map for the general election in April. If the ruling Saenuri Party and the main opposition Democratic Party, formerly known as the New Politics Alliance for Democracy, fail to reach a consensus, the current electoral district system will be invalidated starting Friday.

“Starting from midnight [on Friday], we will have a legislative emergency,” Chung said.

While the leaders of the two parties have agreed to increase the number of elected seats by seven, to 253, thereby reducing the number of proportional seats to 47, both sides have continued to remain deadlocked over the details of the proportional system.

While Chung hinted that he would move to submit the draft on his own, he made a final plea to lawmakers asking that they make their best effort to reach a compromise on the number of districts to be contested - the most important aspect of the election.

“The people will keep a close watch on parliament for the next 14 hours to see if it is capable of reaching an agreement on an electoral map,” Chung said, adding that he would leave the door open for both parties until midnight.

Despite the urgency of the issue, it remained far from clear whether the two main parties would be able to work together in the face of what the Assembly speaker described as a “national emergency.”

The legislature has been working on creating a new electoral constituency map following a Constitutional Court ruling in 2014 rendering the current map unconstitutional.

The court ordered redistricting to fix unequal representation caused by population changes, specifically the migration of people from rural areas to cities.

According to the ruling, the ratio of the most populous electoral district to the least populous must be lower than 2 to 1. Currently, that ratio is 3 to 1.

The court also ruled that the new electoral constituencies must be introduced on Friday.