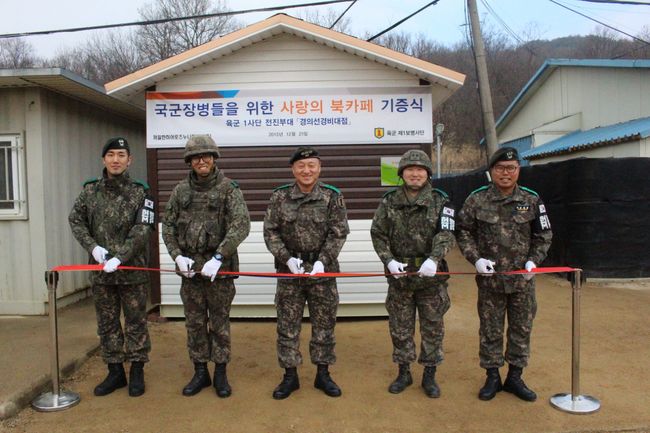 A fan club of singer-actor Kim Jae-joong, a member of the K-pop trio JYJ, has donated a book cafe to the Korean Army’s First Division in the name of the K-pop star.

C-JeS Entertainment, which represents Kim, and the First Division said on Thursday that the book cafe opened on Dec. 21 and is equipped with about 500 books, CDs and DVDs. The book cafe also has air conditioning and ondol or under-floor heating.

According to the Army, the fan club and Kim had discussions to choose a location to build a book cafe, and Kim, who is serving in the Army’s 55th Division, wanted to install the book cafe at the First Division, where he spent six weeks in basic training when he joined the military last March.

The fan club has been helping various groups of people in need from children without parents to abandoned babies.

Although Kim is serving in the military, his new album containing 10 tracks will be released in February. C-JeS said Kim finished recording all of the songs before he joined the Army.

Meanwhile, many fan clubs donate in the name of their celebrities to commemorate special occasions of their idols, such as the 10th anniversary or launch of a new drama series.

For example, fans of singer Seo Tai-ji donated money to plant about 5,000 trees in 2012 to mark the 20th anniversary of the singer’s debut in Guapi Assu, Brazil, which is about 70 kilometers (43 miles) from Rio de Janeiro.