Rock-bottom rates give rise to new ways to save

Rock-bottom rates give rise to new ways to save 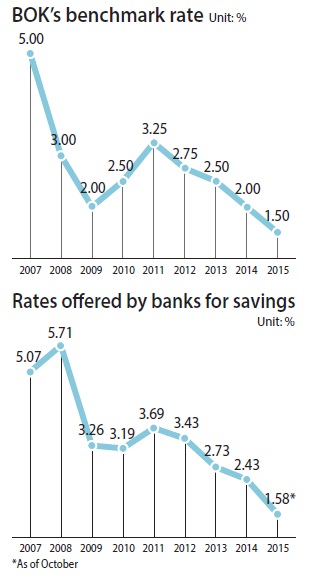 In an episode of “Reply 1988,” a popular 2015 television drama depicting ordinary Korean households in the late 1980s, the family of main character Kim Jeong-hwan are about to strike a jackpot.

Jeong-hwan’s mother is blithely eating a meal with her husband and two sons when she hears a familiar voice from the TV. An announcer is reading the number of a winning lottery ticket. When the family realizes it’s their ticket, they shout in celebration and put their arms around each other.

They have won 100 million won.

Fans of the series in their 40s and 50s recall when 100 million won could buy them a decent residence in an affluent neighborhood in southern Seoul - or earn interest of around 1.25 million won per month if deposited in a bank.

“I couldn’t laugh at one of the characters’ lines, grunting about a 15 percent interest rate,” said Mr. Kim, a 43-year-old employee of a major conglomerate. “Compared with today’s 1 percent rate, I wish we were back in those good old days.”

“We were more hopeful about the future back then,” Kim said, “although we were poorer.”

Being rich has become an elusive dream in Korea. As the era of interest rates of less than 3 percent has stretched for the last three years, many in Korea are struggling to accumulate assets.

As interest rates started to fall in 2012, many Koreans have taken advantage of lower borrowing costs to get a mortgage and buy a residence. At the same time, they have been complaining of reduced returns from savings.

With expectations that the Bank of Korea (BOK) will keep its base rate at an all-time-low of 1.5 percent for several months in 2016 despite expected rate hikes in the United States, people here are searching for ways to increase their assets, such as subscribing to financial products that offer higher interest rates and better tax benefits. 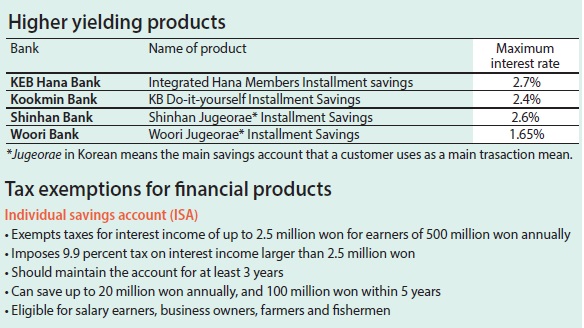 Although the U.S. Federal Reserve raised its key rate by 0.25 percentage points for the first time in nearly a decade in December, the Korean central bank has made it clear that it will not immediately follow the U.S. experts, and market watchers say it is desirable for the BOK to maintain the current 1.5 percent or cut it once more in 2016, considering current economic conditions. So this year is highly likely to be another year of low interest rates.

The government has been touting individual savings accounts, or ISA, as a pragmatic way to save on taxes and earn better interest income.

The ISA system, slated for introduction in March, will enable taxpayers to manage their deposits, time-installment savings accounts, funds, equity-linked-securities (ELS) and other instruments on a single electronic platform.

They can put up to 20 million won in their ISA per year and hold the account for five years. Every year, up to 2 million won from total interest income will be tax-exempt. That benefit is good for salary earners and also farmers and fishermen.

Commercial banks are preparing for the ISA adoption and trying to attract customers with unique savings products that offer better rates.

“Expecting additional U.S. interest rate hikes, as well as potential increases in Korean rates, many customers are looking for short-term but lucrative products,” a salesperson at Woori Bank said. “With the introduction of the ISA, banks are also trying to attract customers with an array of rate benefits.”

In particular, banks are offering more benefits for customers who use their savings account, known in Korean as jugeorae, as a main transaction means, including receiving monthly wages and paying utility bills.

KEB Hana Bank has come up with an installment product that also offers higher interest rates for customers who use the bank’s savings account as their main financial account. It offers up to 2.7 percent for those who also use KEB Hana Cards and other fund products developed by the financial group. The minimum subscription period is one year. 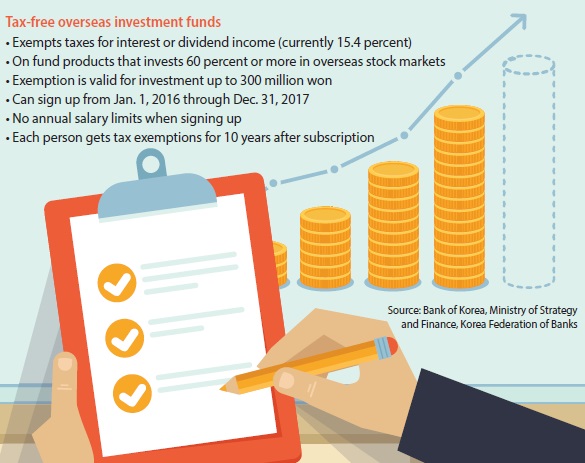 KEB Hana Bank has launched a novel “I can do it” installment savings account, which offers higher interest rates in accordance with the customers keeping certain promises.

Based on a base rate of 1.8 percent, customers can set a target interest rate when opening an account.

Customers can make the following promises: raising the national flag on national holidays, joining the government campaign to drive cars on designated days, turning off smartphones and conversing with family during meals, cutting back on drinking or smoking.

Customers also need to pay utility bills through the account and regularly use its smartphone banking, Internet banking and call center.

The highest interest rate that customers can reach by fulfilling such promises is 4.3 percent.

KB Kookmin Bank is promoting its KB Do-It-Yourself installment savings that offers up to 2.4 percent. Customers can design the installment program as they want and get higher rates.

Woori Bank is offering up to 1.65 percent for new customers who subscribe to a new ISA-fitted installment savings account. Although it is a time-installment product, customers can use the deposits at any time as with normal savings accounts. The minimum subscription amount is 1 million won, which can be taken out whenever customers want. There is no set subscription period, but deposits for more than 10 years will get compound rates.

Securities and derivatives investments, as well as tax-free overseas investment funds, are popular alternatives to achieve both stability and higher interest income than regular bank savings.

Overseas investment funds are getting popular as the stock markets of American and other advanced economies are expected to stay strong next year, and as the government begins offering tax exemptions on interest income to people who sign up for these funds within next two years.

Starting Jan. 1, people who subscribe to a fund that invests 60 percent or more in overseas stock markets are offered tax exemptions on interest and dividend incomes. New subscribers have to sign up from 2016 to Dec. 31, 2017, to get the tax exemption. Once signed up, the exemption lasts for up to 10 years. They can invest up to 30 million won into these funds every year.

So far, fund subscribers who invested in stock markets abroad had to pay income taxes of 15.4 percent on all revenues made by buying, selling, dividends and exchange rate differences, unlike investors in local index-linked funds who already got tax benefits.

Local analysts picked the U.S. and Japanese stock markets for stability and mid-level revenues, as the two markets are less volatile against currency fluctuations, thanks to strong and stable domestic investors who keep up the indices even during money outflows.

Major indices in the United States and the size of returns are likely to show little changes next year, analysts expect.

So they recommend that people pick stocks considering each sector’s performance, not the individual index.

“As the U.S. economy recovers, industrial sectors closely related to domestic consumption, such as IT, health care and regular consumer products, will generate significant returns, while the revenues of energy and industrial material stocks may fall as American exports may decline due to the strong dollar,” said Lee Eun-young, an analyst at KDB Daewoo Securities.

“The domestic investors’ strong and stable demand for the benchmark indices in the U.S. and Japanese stock markets play an important role in preventing the indices from plunging,” Lee said. “Robust corporate performances are another factor that keeps the indices stable.”

As the U.S. Federal Reserve announced that it will carry out continuous but gradual rate hikes over the next couple of years, European and Japanese currencies will depreciate and there will be foreign capital outflows, while volatility of their financial markets intensifies due to high exposure to foreign capital and high reliance on exports, Lee explained.

“The earnings per share in Japan could rise as much as 5 to 7 percent, while that in European markets could rise 10 percent depending on political issues or fluctuations of crude prices,” Lee said.

Investors aiming to invest for retirement should choose a market based on the domestic economy’s stability, like Germany and Japan, when picking a country from a list of highly exposed economies, she advised.

Lee picked Vietnam and India as two of the emerging markets that are worthy of investments.

“We usually don’t recommend derivatives for those who pursue stable investments because these products are high-risk, high-return by nature,” said Gilbert Choi, a senior derivatives analyst at NH Investment & Securities. “The asset allocation ETFs I mentioned, of course, offer lower returns than those conventional futures and options - usually lower than 5 percent - but they certainly are solid in terms of stability.”

Choi recommended a target-date fund (TDF), a hybrid fund in which asset managers automatically allocate money in different places, like stocks, bonds and cash, depending on how the financial market performs over the course of a long-term time frame set up by the subscriber. In Korea, TDFs are operated for shorter time period than in other countries. Fund consumers can find a TDF as a type of pension savings funds.