Government stuck in past in retail shop payment systems

Government stuck in past in retail shop payment systems 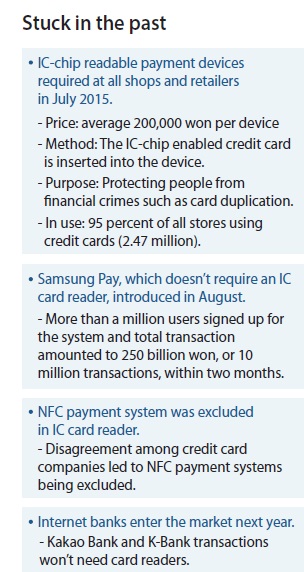 Mr. Park, a 50-year-old manager of a coffee shop in Yeouido, western Seoul, recently bought an integrated circuit (IC) card reader for 400,000 won ($343). Last summer, the country’s financial authority required shops to use them so customers could pay with credit cards with an IC chip embedded in them.

“I don’t understand why the government told us to buy the new card reader so early in the transitional process,” Park said. “They could have waited until the different mobile payment systems were established.”

Many industry insiders are critical of the financial authority forcing shop owners to buy IC card readers in July. They say the government is behind in the latest technological trends.

The government’s decision came after an information leakage scandal last February. Financial authorities believed that it was safer to use cards with IC chips compared to traditional magnetic strips, which are thought to be more vulnerable to financial crimes, including card duplication.

Due to the government’s decision, approximately 2.47 million credit card company affiliates, or 95 percent of the total 2.6 million stores, were forced to buy the new card reader. The credit card companies chipped in 100 billion won to support their affiliated stores.

Unfortunately, Samsung Pay, which Samsung Electronics introduced in August, turned the market upside down. Samsung Pay can work with cards that have magnetic strips and allows its customers to secure their identities with fingerprint recognition authentication.

Samsung Pay users have grown significantly thanks to its ease and safety. Samsung Pay does not require stores to have IC card readers.

“We did not consider Samsung Pay prior to commercializing IC card readers,” said a representative for the Financial Supervisory Service (FSS). “We intended to adapt the magnetic payment system just in case IC chips run into trouble.”

IC card readers currently cannot process NFC. The payment system enables a portable device such as a smartphone to establish radio communication with the card readers nearby. Currently, Google’s Android Pay and Apple’s Apple Pay are using this system. Samsung Pay has NFC payment systems in its smartphones as well.

The financial authority failed to include NFC payment systems in the new IC card readers because there was discord between the major credit card companies. Hana and BC agreed to adapt the system while others were unwilling due to extra charges the companies would have to pay mobile service providers.

Some industry insiders argue that a lack of government’s efforts further complicated this situation. “Financial authorities failed to ease or mediate the tension between credit card companies,” said a representative for a credit card company.

Many worry that store owners will have to pay another 100,000 won or so for a new card reader if NFC gets popular.

Moreover, Kakao Bank and K-Bank - the first two Internet banks in Korea - are expected to open next year and shake up the existing payments market. They would not require any type of credit card readers in transactions. Customers could pay directly using their registered banking accounts, which would save them transaction fees as well.

“As the credit card industry develops rapidly, we also need to adapt to new technologies such as NFC as fast as possible,” said Kim Jong-hyun, a senior researcher at Woori Finance Research Institute.

“As of now, more people use traditional plastic credit cards, and we need to prioritize them in our policies,” said a representative at the FSS.