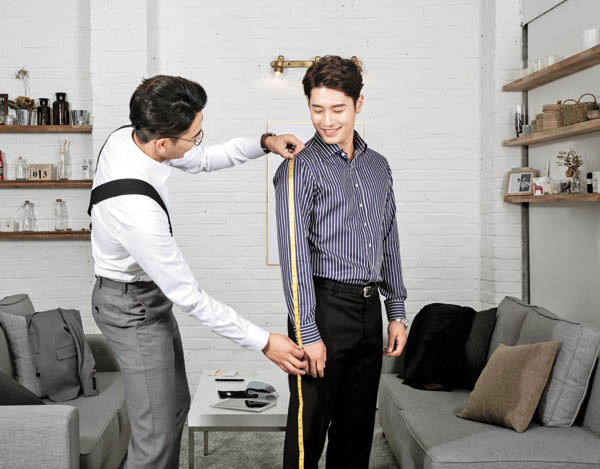 Ordering custom-tailored suits used to be a hassle for Jun Kim, a 30-year-old man living in Seoul.

Tailor shops don’t usually stay open after office hours. Even if there was a store that remained open late at night, it was a bother to go there.

So Kim decided to try Stripes, a custom-made menswear start-up, after coming across its advertisement on Facebook last year.

Kim filled in his name and contact number on the company’s website. A customer service person called him to arrange a meeting with a stylist who would take his measurements and suggest fabrics and designs.

The big selling point: the stylist would come to him, not the other way around.

The stylist came to Kim’s office in the Gangnam District area, and the measurements were finished in 10 minutes.

Stripes is just one example of start-ups trying to bring online traditional retail businesses and services like tailoring.

The first batch was confined to fields pioneered by well-known start-ups like Uber and Airbnb, but now, the range of services are more diverse and cover many mundane parts of people’s daily lives.

Korea has an advanced technology infrastructure conducive for those services, which are referred to as on-demand or online-to-offline (O2O) services. The country boasts the fastest Internet connection in the world, while smartphone penetration ranked fourth in the world in 2014. And with Koreans working the second-longest hours among industrialized countries, O2O services designed to save time and boost convenience will likely appeal to those time-strapped people.

Whether people migrate from the old ways to online and mobile-based platforms depends on a myriad of factors like price and convenience.

But tech-savvy young people like Kim are definitely game.

“When it comes to time-saving and convenience, I was really satisfied,” Kim said of his tailoring experience. “I was able to save time going back and forth, and my shirt was delivered within a week, which was great.”

Founded in January 2013, the Seoul-based Stripes enjoys two-digit sales growth every quarter, boosted by its growing number of consumers.

Steve Lee, the CEO of the start-up, had the idea because he likes tailored clothes but not the hassles that go with them.

“I prefer tailored clothes to mass-produced, ready-made products, but I found having suits custom-made consumes a lot of time,” said the CEO, whose Korean name is Lee Seung-joon. “So I thought it would be great if I could place an order online and have a tailor come to where I am.”

With a focus on customized shirts, the platform allows users to choose fabrics and the design of the shirts’ cuffs and collar.

“Most customers are in their late 20s and 30s,” he said. “Once they submit their contact information online, they can get fashion advice from our stylists and look at sample products even if they don’t buy anything.”

Stripes opened in Singapore in November to target tech-savvy customers there and will enter Hong Kong in February.

Tailoring shirts is but one example of new tech-based services. Also on the radar of O2O entrepreneurs are services to help with laundry.

Clean Basket is one. A user can request pickup and delivery at any time through the app. The company sends the clothes to its contracted laundries.

The service operates in seven districts in the city, including Gangnam District, Seocho District, Gwanak District and Dongjak District south of the Han River, and Mapo District in western Seoul and Yongsan District in central Seoul.

CEO and founder Kim Woo-jin even worked the phone at his call center to get customer feedback and improve customer service.

As a graduate of Northwestern University’s Kellogg School of Management, he also directly handles foreign customers living in Korea. 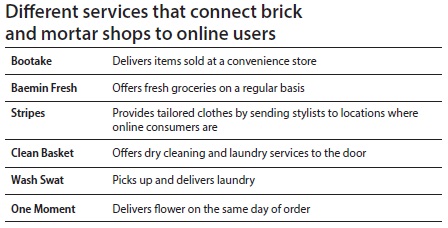 Despite Clean Basket’s sales growth of 20 to 30 percent every month, he acknowledged that carving out a niche in the market and generating sizable profits are not easy.

“It costs a lot to provide the delivery service because we need to hire a number of deliverymen,” Kim told the Korea JoongAng Daily. “So if a company fails to receive investments in the beginning phase, the chances are it will close and be gone.”

To Kim’s relief, Clean Basket managed to bring in an 800 million won investment in December from Bon Angels and Capstone Partners.

Many laundry-related apps have sprung up, hoping to emulate the success of companies like Washio in the United States.

“Many companies come and go,” Kim said, “But I believe demand is shaping up, and the app service providers can possibly take the laundry business to a new level as the sector saw few innovations or improvement in recent years.”

Some O2O providers offer to take care of people’s daily needs by handling the purchase of groceries, food and other household items.

Bootake delivers orders from nearby CU convenience stores, though the minimum purchase is set at 10,000 won in most stores.

“Items are usually delivered in 30 minutes, and we charge delivery fees ranging from 1,500 won to 3,000 won depending on locations,” said Lim Jae-won, a researcher at Bootake.

Baemin Fresh ships vegetables, bread and fruits, as well as side dishes, to the residences of users.

For the side dishes, the delivery unit prepackages a set of dishes, depending on the number of people.

“On Korean dinner and breakfast tables, we typically have three to four side dishes with rice,” a representative of Baedal Minjok said.

“But for working moms, it’s not always easy to prepare the food on a daily basis,” he continued, “So our main users are women in their 20s or 30s who don’t have enough time to cook.”

Baemin Fresh features a regular delivery option for customers so that they can receive deliveries on a regular basis without placing an order each time.

The proportion of customers using regular deliveries stood at 33 percent, the representative said.