Museum welcomes Year of the Monkey with special show

Museum welcomes Year of the Monkey with special show

“Songhagoseungdo (Painting of an Old Monk Under the Pine Tree)” by Jang Seung-eop (1843-97). [NATIONAL FOLK MUSEUM OF KOREA]

“A monkey’s butt is red. Red are apples. Apples are delicious.”

This is the beginning of a Korean children’s song that has been around for decades.

Red often means fighting off evil, and traditionally in Korea, people have associated monkeys with fighting demons and preventing disasters. A monkey mask painted in red and monkey-shaped figurines placed on the roofs of traditional buildings all attest to that.

Unlike in China and Japan, monkeys weren’t around in the Korean Peninsula in ancient times.

Koreans learned of the animal through artwork from China and associated monkeys with many images and symbols, besides an auspicious animal that fights off evil. They include wishes for successful careers, prosperity, fertility and maternal love, among others.

Since this year is the Year of the Monkey according to the Chinese zodiac calendar, the National Folk Museum of Korea, as it has been a tradition for years, has prepared a special exhibition on the animal and its place in Korean history. About 70 folk artifacts are on display for this exhibition.

“Monkeys are generally portrayed as animals that are crafty, talented, good at imitating and mischievous,” the museum’s director, Cheon Jin-gi, said. “But in paintings and ceramic pieces, the animal’s particular maternal love is highlighted. They are also illustrated as assistants to monks or seen holding fruits such as a peach, which symbolizes longevity.”

In an ancient Chinese tale, a mother monkey whose baby was kidnapped by a soldier walks 40 kilometers (25 miles) to get her baby back. But when she fails, she dies of despair. It is because of this tale that Koreans have come to link monkeys in particular with maternal love.

One of the highlights of the exhibition is a 19th-century painting titled “Songhagoseungdo (Painting of an Old Monk Under the Pine Tree),” by Jang Seung-eop (1843-97), in which a monkey is seen offering a Buddhist script to an old monk seated on a tree branch. Jang is often considered one of the most important painters from the latter part of the Joseon Dynasty (1392-1910).

Another painting from late Joseon, “Anhaigapdo (Painting of a Monkey Catching a Crab with the Pine Twig),” portrays a monkey trying to catch two crabs with a stick. Museum officials say the two crabs here represent two kind of tests during Joseon through which people became government officials, and therefore the painting conveys a wish for good test results and a successful career. 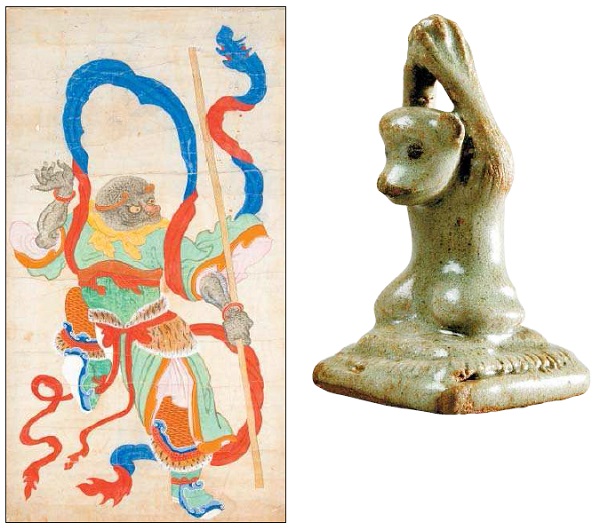 A 12th-century monkey-shaped celadon stamp is humorous. It has its two hands pressed together, like it’s praying, over its head. It looks like it’s apologizing for something. Monkey-shaped masks from the 20th century used in traditional folk dances also feature playful, clown-like facial expressions. 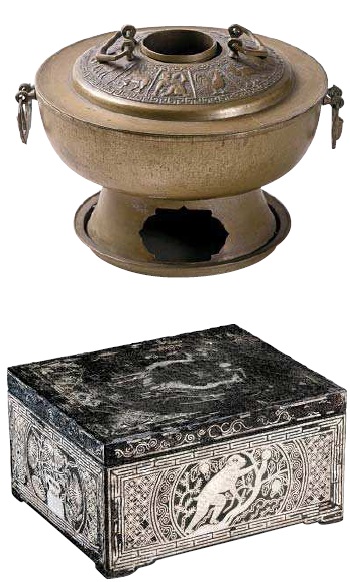 Top: Brass chafing dish with a design featuring the 12 animals of the Chinese zodiac. Above: Iron case with silver inlaid design [NATIONAL FOLK MUSEUM OF KOREA]

On a late-Joseon-era container with silvery inlay, a monkey is seen alongside cranes, mandarin ducks and chrysanthemum. The monkey is shown picking fruit. And on a rare, dumbbell-shaped ink stone from late Joseon, a monkey is seen reaching for appetizing grapes.

These, historians say, convey the Joseon people’s yearning for prosperity and fertility, among others.

Besides displaying these relics, the museum tried to differentiate this exhibition from previous ones by inviting monkey trainers at zoos who take photos of monkeys as a hobby to showcase their works.

On display are numerous photos they took of the animals. Interestingly, monkey trainers allege that the monkeys that appear in ancient paintings, ceramic pieces and craftworks are a different species of monkey, according to museum officials.