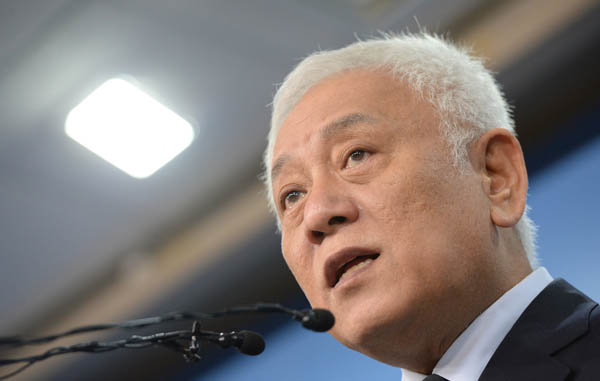 Rep. Kim Han-gill, who co-founded the main opposition party two years ago, announces his decision to leave the Minjoo Party on Sunday at a press conference at the National Assembly. [NEWSIS]

Rep. Kim Han-gill left the main opposition party that he co-founded two years ago to join Rep. Ahn Cheol-soo, the latest blow to the Moon Jae-in leadership of the party.

With his decision to walk away from the Minjoo Party of Korea, formerly called the New Politics Alliance for Democracy (NPAD), Kim became the eighth legislator to follow the software mogul-turned-politician Ahn, who left the party on Dec. 13.

“I am leaving the party today and standing on a starting line for new hope,” the-four-term lawmaker and novelist said before reporters at the National Assembly. “We need to map out a new way of politics from scratch.”

In a direct jab at the embattled Moon, the former co-chairman of the party said he was leaving because the status quo within the party will inevitably lead to a crushing defeat in April’s general elections.

“I have realized how powerless I am before the power of a party establishment that has rejected change,” Kim lamented.

The NPAD was founded in March 2014 as a merger of Kim and Moon’s Democratic Party and supporters of Ahn, who calls himself a change agent for Korean politics. Bitter factional strife has intensified within the party as the general elections near.

Looking back at his decision to combine the two political groups two years ago, Kim recalled he had promised the software mogul-turned-politician that he would help Ahn overcome challenges posed by politicians with vested interests and who resisted change and reform. Kim admitted he had failed to keep that promise.

“The fact that the two founders of the party have left is a testament to the dire situation the party is facing now,” Kim said.

Ahn and Kim stepped down from their co-leadership positions in the aftermath of the party’s stinging defeat in by-elections in July 2015 and remained outside of its controlling circle.

When asked whether he would help his former partner create a new political party, Kim did not give a definite answer, saying he would discuss the matter with relevant people.

But Kim is expected to join Ahn’s endeavor in creating a new party in the coming days.

With Kim’s departure, the number of parliamentary seats commanded by the Minjoo Party is now down to 118 in a 300-member Assembly.

In multiple polls conducted last week, Ahn’s political group was ahead of the Minjoo Party in popularity. In a joint survey conducted by broadcaster KBS and Gallup Korea of 1,000 adults nationwide from Tuesday to Wednesday, Ahn’s political party in-the-making received 20.9 percent approval, ahead of the Minjoo Party’s 16.6 percent. The ruling Saenuri Party led with a 37.3 percent approval rating.

Ahn’s group was also favored by voters in the Jeolla region, the opposition’s traditional stronghold, with 37.9 percent popularity, trailed by the Minjoo Party with 16.4 percent. More information about the methodology of this poll is available on the National Election Commission website.

Considering the political importance of the Jeolla region for opposition lawmakers, representatives of districts in the region could jump on Ahn’s bandwagon. Reps. Park Jie-won and Joo Seung-yong are among the opposition lawmakers expected to abandon their party soon.

Political observers note as many as 70 lawmakers who served in the Kim Dae-jung government or who have ties to people who served the late President Kim could walk away in coming weeks.