When the happiest day turns into the saddest

When the happiest day turns into the saddest 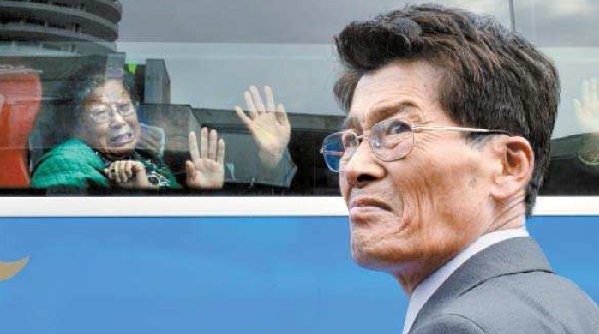 Lee Bok-soon, 88, bids a final farewell to her son Jung Gun-mo, 64, as the second round of family reunions came to an end on Oct. 26 at the Mount Kumgang resort. The mother and son met each other for the first time since he was abducted and taken to North Korea as a young man 43 years earlier. The two had 12 hours of face-to-face meetings before what was probably their last moment together. [NEWSIS]

Two months ago, Oh Jang-kyun, 65, met his father for the first time.

Oh was one of 643 South Koreans who crossed the border into the Mount Kumgang resort to reunite with their relatives during the Oct. 20-26 reunions of families separated by the 1950-53 Korean War. He traveled with his mother, Lee Sun-gyu, 85.

Oh’s family drew heavy media attention because of its dramatic story. Lee saw her husband vanish in July 1950 at the height of the Korean War, just seven months after they had wed. She was pregnant at the time. She never remarried.

On Oct. 20, the 65-year-old son saw his father, 83, for the first time in his life. The emotional encounter lasted only three days before they were separated again - with near certainty that they will never see each other again. 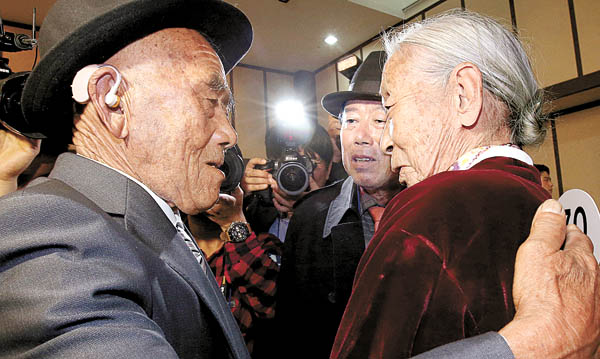 Lee Sun-gyu, 85, right, is reunited with her husband, Oh In-se, 83, for the first time in 65 years after they were separated by the outbreak of the Korean War at the reunion center at Mount Kumgang in North Korea during the inter-Korean family reunions on Oct. 20. She was accompanied by their son, Oh Jang-kyun, who had never met his father before. [JOINT PRESS CORPS]

“I feel like there is a big hole in my heart, like it was struck by a bomb,” said Oh of his anxiety in the aftermath of the family reunions.

“When I think of my father now, deep anger grows inside of me out of a sense of pure helplessness,” Oh, a farmer in Cheongju, North Chungcheong, said in a phone interview with the Korea JoongAng Daily. “I didn’t feel this helplessness at first. But as I spent time thinking about my father, I can see what he must have gone through in the North from my memory of his physical shape - his face filled with wrinkles and a body frame without much muscle.”

Oh said he hoped to overcome his grief next year. But he acknowledged he’ll probably feel flashbacks of grief every holiday season as he thinks of his father.

Oh said the grim reality that he will never see his father again - even though he lives just a few hours away - instills particularly deep resentment and frustration.

Sohn Jong-hun, 67, who also met his 83-year-old father for the first time two months ago, expressed the same kind of frustration he has felt since the meeting.

“I think it would have been better for me had I not met my father at all,” Sohn said. “The only meaning in our reunion was that we finally met. There is nothing more to it without any hope to see him again.”

An official at the South Korean Ministry of Unification said there has been no discussion about organizing reunions for the relatives lucky enough to be reunited within the past 15 years. There are still more than 60,000 people in the South hoping to be selected in the computerized lottery system to get a first chance to see their loved ones.

Oh and Sohn were not alone in their anxiety and disappointment. In fact, more than 20 percent of surveyed families said they have been emotionally affected in the aftermath of reunions.

In a survey of 412 families in the South who took part in two rounds of reunions in October by the Red Cross, which organized the events with its North Korean counterpart, 100 said they had been emotionally distressed and faced aftereffects such as depression following the reunion. Of the 100 distressed relatives, 47 said they had suffered from insomnia, while 30 said they felt helplessness as there was nothing they could do to help their relatives in the North.

“Those who returned from the meeting kept thinking about their families left behind in the North, which prompted a loss of appetite and insomnia, which could be fatal for aging relatives,” said Park Yu-jeong, a psychotherapist at the Korean Red Cross who provides counseling to reunion participants. “A woman who met her father for the first time in her life said that people asking her about her father aggravates her emotional struggle. She said she is reminded of her heartbreaking farewell to her father every time she answered such questions, deepening her emotional pain.”

Many participants in the three-day reunions suggested changes to allow families more time together without interference from the media or North Korean officials. For the reunions in October, which were the 20th round in 15 years, families were given 12 hours of face time, 10 hours of which consist of group meetings where North Korean officials and the media are present. Only two hours were set aside for private meetings.

“I suggest the government revise the format of the program,” Oh said.

To help the relatives, the South Korean government has called for exchanges of letters between separated relatives and setting up a system in which families will be notified of relatives’ deaths in the North.

The response from Pyongyang was lukewarm. In the latest inter-Korean talks involving vice-ministerial officials earlier this month, Seoul insisted on regularizing family reunions as its top priority. Setting up further reunions has gained urgency because the majority of the remaining 66,000 separated relatives in the South are in their 80s and older.

The talks ended without any agreements because the North demanded the resumption of South Korean tours to Mount Kumgang in exchange for additional reunions, which Seoul rejected.