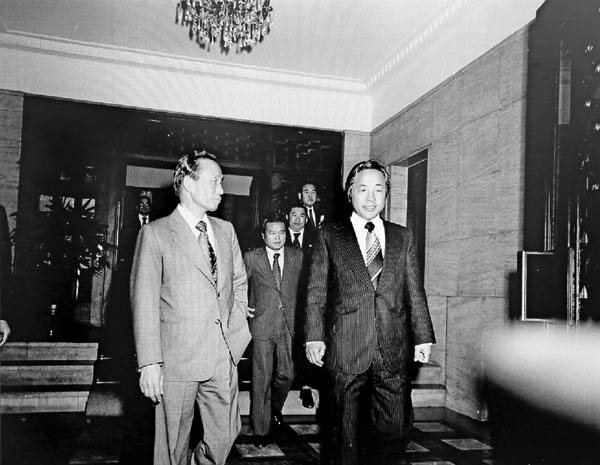 President Park Chung Hee escorts opposition leader Kim Young-sam after their meeting at the Blue House on May 21, 1975. [National Archives of Korea]

After Kim Young-sam was inaugurated as president, I served as head of the ruling Democratic Freedom Party for two years, during which I treated him with the utmost respect. Because of my responsibility as head of the governing party, I refrained from challenging his initiatives and instead utilized self-control and perseverance in my political activities.

But the one thing I should remind you of was my dispute with Kim over our different perspectives on history.

Following his inauguration, Kim promoted his government as legitimate and one for the people - one that was passed on to his office from the interim government in Shanghai during Japanese colonial rule in the early 20th century. So Kim perceived our former governments as past histories to be ashamed of and as vestiges to be eradicated.

To Kim, founding President Syngman Rhee and Park Chung Hee were nothing more than dictators, and he shunned their contributions to the foundation of the country and its economic growth. It was a logic I could not accept. 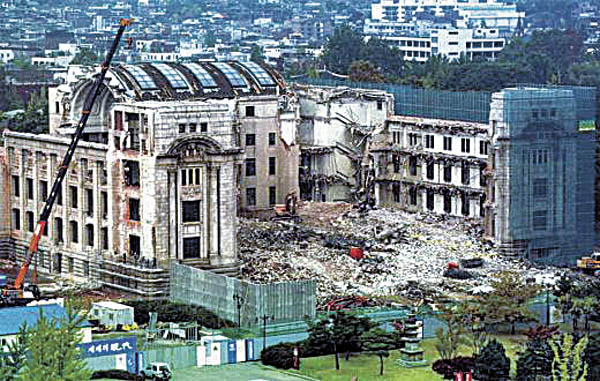 A view of the Japanese Government-General Building as it is torn down on Oct. 29, 1996. The building was completely demolished on Nov. 13 that year. [JOONGANG PHOTO]

There is no shortcut to the flow of history. Without yesterday, there cannot be tomorrow. To me, Kim’s view on history was nothing but narrow-minded and dogmatic.

On May 16, 1993, we attended a commemoration to honor the 32nd anniversary of the May 16 revolution [coup], where I unleashed my own historical perspective.

“Former Presidents Syngman Rhee and Park Chung Hee both worked hard to rebuild the country from the ashes, and Chun Doo Hwan and Roh Tae Woo succeeded them to lay down what we have today, whether we like it or not.

“The Kim Young-sam government has also inherited these past achievements and promises a better future. … No matter what, the May 16 revolution exists as historical fact and helped lay the grounds for prosperity.”

My speech that day was heavily covered by the press and circulated quickly.

On June 3, Kim held a press conference to mark his 100th day as president. When asked about the May 16 revolution, Kim said without hesitation, “It was a military coup by definition, which marked a big retreat from the country’s progress.”

I felt betrayed when I heard the news.

When I decided to endorse his presidential campaign on April 8, 1992, I asked him to put an end to his hatred toward Park Chung Hee, to which he agreed. But he reneged on that promise quickly after he took office.

Kim’s damning remark that day signaled the end of our political partnership.

While Kim referred to the revolution as a retreat from progress, there was not a single instance in which the country took a step back - it only went forward in a different direction.

It must be left to historians to judge. If politicians, including the president, attempt to judge past events, it inevitably leads to grave misjudgments.

Later, Kim announced on Aug. 9, 1993, that the former Japanese Government-General Building in front of Gyeongbok Palace would be demolished.

The news deeply disappointed me. It was an issue that should have been approached carefully, taking into consideration its historical significance, not with the intention to score political points.

The former government-general building, completed in 1926 following 10 years of construction, was magnificent in its scale and design. Japan didn’t even have a structure to rival its splendor. I saw the building for the first time when I was a child and recall being awed by its enormity.

After Korea’s liberation from Japan, it had been used as the inauguration site for President Syngman Rhee in 1948 and served as the government headquarters for 38 years.

I worked there for four and a half years as prime minister in the Park Chung Hee government.

The building was used as the headquarters of the Korean government longer than it ever had for the Japanese colonial government.

In 1986, the structure was converted into the National Museum of Korea and drew thousands of visitors after that.

President Kim argued that demolishing the building would restore the spirit of the people, and the decision sparked an intense debate. The plan’s proponents claimed the building was a remnant of Japanese colonial rule. But I disagreed - even disgraceful history must be remembered so that future generations don’t repeat the same mistakes.

History cannot just be rubbed away. In New Delhi, a statue of Queen Victoria still stands in the heart of the city despite the fact that it symbolizes British colonial rule. India decided to preserve the statue out of respect for its national history.

Some parts of our personal history may be painful or disgraceful, but nevertheless, it can neither be erased nor omitted. Though I agreed with Kim’s drive to dismantle the building in principle, I advocated that we should relocate two symbolic parts of the building to the Independence Memorial Hall in Cheonan, South Chungcheong.

Determined to draw Kim’s consent in their preservation, I told him during my weekly meeting with him that the building’s main hall was historically significant since it was once used as the assembly hall for the Constitutional Assembly.

“Don’t demolish the main hall,” I said. “Instead, relocate it to the Independence Memorial Hall.”

He frowned as I made the suggestion, apparently annoyed.

I continued, insisting that we should also preserve the flagpole that had been erected in front of the building by relocating it to the memorial hall.

On that very pole, Korea had raised its national flag in 1945, in celebration of the country’s independence from Japan. The South Korean Army also raised a flag on that pole when it reclaimed the capital from the North at the height of the 1950-53 Korean War.

Yet despite my pleas, Kim flatly rejected both proposals.

“Stop your nonsense,” he said, leaving me dumbfounded.

On Liberation Day in 1995, demolition work began on the historic monument, which was reduced to crumbles the following year - along with its main hall and the flagpole.

Even almost 20 years later, I still feel a deep sense of regret over its dismantlement.