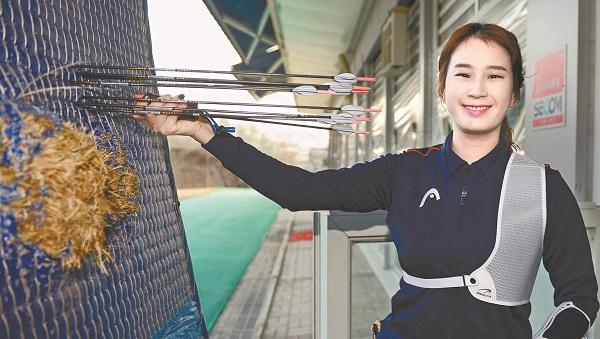 Archer Ki Bo-bae during her training at the Taeneung National Training Center in Seoul on Dec. 22. Ki is the reigning Olympic champion, having won two gold medals at the 2012 London Olympics. [KANG JUNG-HYUN]

The start of a new year is often about breaking an old habit or starting something new. But for archer Ki Bo-bae, 2016 is all about making history.

In the 2012 London Olympics, Ki won gold medals in both the individual and team events. If she defends her individual title in the upcoming Summer Games in Rio de Janeiro, Ki will become the first archer to claim gold medals in two consecutive Olympics.

But it hasn’t always been smooth sailing for the 27-year-old since her victory at the London Olympics.

Ki failed to qualify for the national team in 2014, and she watched from the commentator’s booth as Korean archers won gold medals at the Incheon Asian Games.

It was the first time she hadn’t made the team since 2010.

“Back then [at the Asian Games], I was actually relieved,” Ki said in a Dec. 22 interview with the JoongAng Ilbo. “You know, the national team life has a very strict routine. From dawn to dusk, we have to be training, and by not being on the team, I had lot of freedom. However, as I broadcasted the games, I thought, ‘I have to be shooting again.’”

After missing the major event, Ki returned in style, finishing at the top of the national team qualifiers in 2015.

“It’s difficult for players to be back in the national team again after they previously failed to pass the qualification,” women’s archery national team coach Yang Sang-hoon said. “After failing to enter the national team, Ki’s concentration actually improved. She has become more mature than before.”

Ki impressed last year, winning two gold medals - individual and mixed team - at the Summer Universiade in Gwangju in July, and also at the World Archery Championships in Copenhagen a month later. After the victory, her world ranking climbed to No. 2.

This winter, Ki and her teammates have been training harder than ever, shooting 400 to 450 arrows a day.

“In order to build up stamina so that players don’t feel fatigue in any situation, we also increase weight training in the winter,” assistant coach Han Seung-hoon said.

Korea has been the dominant nation in archery, but the field has become more competitive since recent changes by the World Archery Federation.

In the new set system in recurve matches, archers receive two points for winning each set of three arrows. If both athletes score the same in a three-arrow set, they both receive one set point. The first athlete to reach six set points wins the match.

In the past, archers would shoot 12 arrows, and whichever competitor had the highest number of points afterwards would win.

From the Summer Games in Rio, the team events will be also held under the new system.

“I’ll say ‘luck’ influenced the game in about five to 10 percent of matches, but now it’s more than 50 percent,” said Moon Hyung-chul, the chief coach of the Korea archery team. “Because the importance of one shot has become larger than before, the psychological side of archery has gotten very important.”

To increase the level of athletes’ game, the national team has now introduced shoot-offs - in which the result is decided by a single arrow - as a category in the team’s qualifiers.

But the additional metric isn’t likely to affect Ki, as she’s been strong in high-pressure situations.

In the London Olympics final, Ki entered a shoot-off with Mexico’s Aida Roman after tying 5-5 through the fifth set. Ki and Roman both shot eight points on the target, but the Korean went on to win gold, as her arrow was more centered on the bull’s-eye.

Ki also went on to win gold at the Summer Universiade and World Archery Championships through a shoot-off after beating world No. 1 Choi Mi-sun. Ki’s winning percentage in shoot-offs is 75 percent, winning nine times and losing three.

“I do lot of visualization and train my mind in other ways as well,” Ki said. “I hope fans now consider me an archer who has nerves of steel.”

In September, Ki competed at the Rio 2016 Olympic Test Event held at the Aquece Rio International Archery Challenge in Rio de Janeiro, experiencing the venue before the Summer Games kick off.

“It was interesting that wind directions were different than other places because of the venue’s structure, while the shooting place was about a meter above from the ground,” Ki said. “I usually go to Europe for competitions, but since the time difference is the opposite in South America, it was difficult for me.”

The national team will go to Sao Paulo on Jan. 20 to train in Brazil.

Although Ki has yet to confirm her spot in the Summer Games, not many people doubt her selection based on her performance this past year.

From March, the national team will begin its final Olympic squad selection of three archers among 16.

“After winning a gold medal in Rio, I also want to compete in the 2020 Tokyo Olympics,” Ki said.