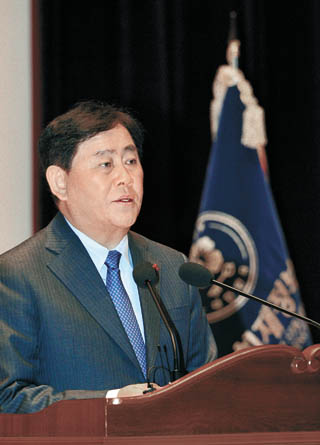 The nation’s economic leaders kicked off the new year by expressing determination in creating structural reforms and securing growth potentials.

Choi Kyung-hwan, the outgoing deputy prime minister for the economy and finance minister, once again emphasized the government will not miss any opportunity for reform at the ceremony held to mark the new year.

“This year marks the third year of the government’s three-year economic reform plan,” the minister said at the ceremony held in Sejong City on Monday, “and we should show achievements.”

Choi, a three-term lawmaker in the ruling Saenuri Party, is soon returning to the National Assembly to run for re-election in April. He served as finance minister for the past 20 months, during which he focused on boosting domestic consumption by keeping an expansionary fiscal stance.

Yoo Il-ho, a two-term lawmaker and former minister of land, infrastructure and transport, is replacing Choi. He will go through a parliamentary confirmation hearing on Jan. 11.

“Legislation of the five labor reform-related bills should be completed as early as possible, and we must also complete structural reforms in four sectors,” Choi said.

The Park Geun-hye government has been pushing for structural reforms in the financial, public, labor and education sectors since last year, saying structural problems in those areas are a major drag on potential economic growth.

The creative economy initiative should have roots in each regional economy, the minister added, citing the government’s economic policy direction for 2016. The Ministry of Strategy and Finance has devised an economic policy plan for 2016 centered on deregulation of future growth industries, such as biotechnology and Internet of Things platforms.

“The centers for creative economy and innovation nationwide will help young people get jobs and open start-ups,” he said. “Regulation-free zones across the country will help foster industries tailored to specific regions.

“Let’s overcome the current challenges and take a new leap by uniting our capabilities,” he added “Delays in reforms trigger a crisis, while early reforms are the key to prosperity.”

The Korean economy is indeed facing a number of challenges in 2016, including the U.S. interest rate hikes, household debt and corporate debt issues, falling exports and high youth unemployment problems.

Lee Ju-yeol, governor of the Bank of Korea, also mentioned structural reforms in a meeting with reporters on Monday.

“The economy will face tough conditions this year,” Lee said at the bank’s headquarters in central Seoul. “Structural reforms entail pain and sacrifice in the short run. Being patient will bear fruit in the long run.”

Lim Hwan-soo, commissioner of the National Tax Service, emphasized that the tax authority will punish tax evaders harshly this year.

“Tax evasion and deliberate delinquency should be punished with all possible means,” Lim said at the National Tax Service ceremony in Sejong City. “The authority will be more rigorous in finding tax evaders.”

The outgoing minister of trade, industry and energy, Yoon Sang-jick, vowed that the ministry’s focus will be on recovering sagging exports and investing in future growth engines.

Yoon said on Monday that the Trade Ministry will make 2016 a time of lifting exports through extensive cooperation with China via the bilateral free trade pact that has gone into effect, and through exploring new markets.

Korea’s exports shrank 7.9 percent to $527.1 billion in 2015 compared to a year earlier due to a slump in crude prices, according to the ministry last Friday. Imports recorded about $436.8 billion, down 16.9 percent year-on-year. As a result, the country failed to reach $1 trillion in trade volume for the first time in five years.

“The global economy and trade are expected to recover slowly thanks to firm growth recovery of the U.S. economy,” Yoon said. “However, the recovery signs from Japan and the eurozone economy is still weak, while situations in major emerging economies like China, Brazil and Russia don’t seem so bright either.”

Despite such uncertainties, Yoon said the Trade Ministry will foster consumer products like cosmetics as new key exports via the Korea-China Free Trade Agreement. It will also support exporters to overcome tight trade conditions by proactively shortening customs and product certification processes and expanding insurances on currency fluctuations.

Yoon will soon resign in order to run in the April general election, and current Vice Finance Minister Joo Hyung-hwan has been nominated to be Yoon’s successor. Joo is scheduled for a confirmation hearing tomorrow.