What make a murky nightscape beautiful are the lights on the buildings and structures across the city.

From an illuminated tower atop a mountain to a water fountain in the heart of the city, various types of lighting designs change how people perceive the city.

Seoul, too, is one of the many global metropolitan cities that contain such features.

At night, the capital city is illuminated with vibrantly colored lights on N Seoul Tower on top of Mount Namsan, while a softer and more elegant light glows from the royal palaces.

However, the nighttime view of Seoul hasn’t been this way for long, according to Jeong Mee and Chung Kang-wha, a married couple who specializes in urban lighting design.

“In 2000, when we came back from studying in Japan, Seoul’s nightscape was simply stark and black when seen from Mount Namsan,” Jeong said in a recent interview with the JoongAng Ilbo.

Chung and Jeong are revamping the design of Seoul with lighting. Left: The National Museum of Korean Contemporary History. Right: The Suwon branch of AK Plaza Department Store are among the buildings for which the couple designed the lighting. [EONSLD]

“All we could see was disorganized street lights and red crosses,” she added.

Jeong is the president of EONSLD, a Seoul-based lighting design company, while her husband, Chung, is a professor of art and design at Konkuk University.

After marrying in 1992, the couple took off to Japan to study more in-depth about urban lighting at the prestigious Tokyo University of the Arts, where both of them obtained doctorate degrees.

For the past 10 years, the couple has been playing a leading role in designing the nightscape of Seoul by participating in the city government-led “Seoul Night View Project” and sponsoring and consulting for the “Euljiro Light Way 2015 Festival” organized by Jung District and the Seoul Design Foundation to revitalize the lighting cluster concentrated in the neighborhood.

So far the couple has designed the lighting for Sungnyemun Gate, Korean National Treasure No. 1, with particular emphasis on highlighting the multicolored dancheong, or traditional decorative painting. 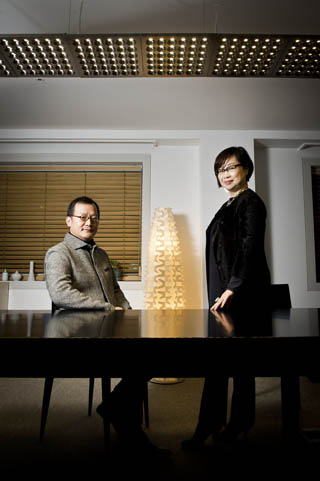 Chung Kang-wha, left, is an art and design professor at Konkuk University, while his wife, Jeong Mee, is the president of lighting design firm EONSLD. [KIM KYUNG-ROK]

The lights on N Seoul Tower that change colors depending on the weather and season as well as the elegant lighting of Seonyudo Park in Yeongdeungpo District, eastern Seoul, are among the couple’s most noteworthy achievements.

In the recent interview, the couple revealed more about the importance of urban lighting as well as how Seoul compares to other cities worldwide.


Q.What was it like to design lighting for Seoul at the beginning when there was mostly nothing?

Jeong: At first, our work stopped at figuring out the locations and structure of the lighting system in Seoul. Then we started to mark landmarks, such as the royal palaces and Han River bridges, by using lights. We used very flashy lights for them so they would seem like pop-up installations on a very black background. Then our brainstorming went to figuring out the identity of Seoul.


Chung: Figuring out Seoul’s identity was certainly not an easy job. After discussing with different experts from different fields, we found our first answer lay in Dongdaemun Market. We were surprised to see foreigners both from the West and Asia fascinated by the dynamic movements going on at clothing shops and tent bars at night even before Dongdaemun Design Plaza was built. There was where the real Seoul was hiding.

So what was that identity of Seoul that you found?

Chung: We started to acknowledge the many faces of Seoul. For example at Dongdaemun, we saw active Korea. But at royal palaces, we saw the serene beauty and charming elegance of traditional Korea. Gangnam District is also glamorous and bustling, but it is something totally different from Dongdaemun. We stopped trying to define Seoul in one word, but accepted the multifaceted aspects of it.

Now, it is hard to imagine a dark night in Seoul. How do you think people’s perception of Seoul has changed?

Jeong: Awareness of lighting has changed a lot over the years. Architect and building owners are starting to consider lighting as an essential part of their work. But compared to other more advanced countries, we still tend to think that lighting is a subsidiary factor.

Chung: Awareness of lighting is apparent in Seoul during the holiday season. We don’t have that much lighting during ordinary days, but at the year-end season, the streets are filled with all the fancy and flashy lightbulbs. I think we still lack deep understanding of why we implement lighting in the first place.

Is that why you participated in the “Euljiro Light Way Project”? 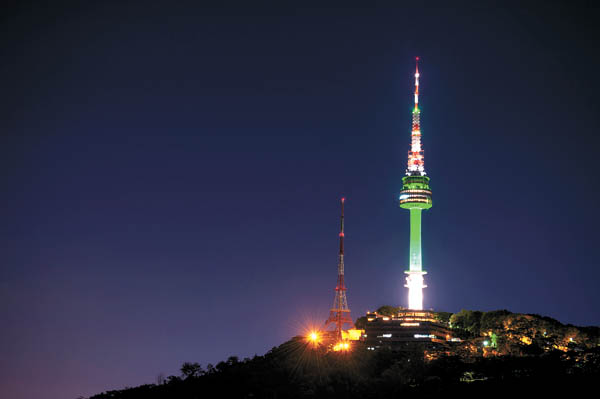 Designed by Chung and Jeong, the lighting of N Seoul Tower changes color depending on the weather and season. [EONSLD]

Jeong: We wanted to change the image of Euljiro from a district that sells lighting fixtures to a place that sells simply light. Light is something we can enjoy to make our life richer.

Chung: Lighting means light [to them]. It is not only an important element to architects but also to ordinary people. That is why when visiting other countries that are very sensitive to individual happiness, we see a lot of sophisticated lighting. In European countries, it is very easy to see people changing lighting installations frequently depending on the situation, like when they are inviting guests. It is because they consider light as that one last factor that completes their space.

Jeong: When we first started out in the lighting business in Korea, we fought with a lot of people. Some architects particularly hated installing lighting in their buildings because they thought it would harm their art pieces. Then there were also those building owners who wanted lighting only because they wanted to show off their properties. They asked us to design something that looks expensive. It took quite a long time to change how people perceive the lighting itself.

How does lighting enhance people’s quality of life?

Chung: Lighting has two purposes. First, it is for completing my space. Second, it is for providing happiness and joy to other people. For the first case, lighting should not be exaggerated. Delicate lighting that would satisfy me and my family is enough. For the latter case, we should make it in balance with the surroundings. If my property stands out with too much lighting, it would be a nuisance to the neighbors.

Do either of you face any inconvenience since you are engaged in the same field?

Chung: I think there are more synergy effects than inconvenience. Because even if we participate in the same project, my wife approaches the matter from a business perspective while I see it from the more artistic point of view. If we ran the same company, we would have conflict, but I, being affiliated with the school, don’t do much more than give advice. It is Jeong Mee who decides and acts.

Jeong: When we went over to Tokyo right after getting married, we fought so much. I majored in space design and Professor Chung majored in lighting design. So we attacked each other, saying that what you are doing is not design, and we would stay up all night to complete our projects just to show it off to each other. It was much fun, too. When we came back to Korea in 2000, we founded EONSLD together, but since he moved to Konkuk University for teaching, the business part of it has been delegated to me.

Why do you think your lighting designs are getting so much attention?

Jeong: We enjoy new and experimental challenges. We don’t give up if we believe something is right. We tirelessly persuaded those who disparaged what we were doing as mere extravagance. While the residents of a high-rise apartment building said they wanted only showy lights, we did the opposite because we believed giving graceful flavor to the stark city night was the right thing to do. I think, having gone through this long trial period, people are finally acknowledging what we are doing.

Chung: Designing lighting means elevating the value of the subject by shining light on it. If there is no subject, there can be no lighting. Therefore, we vigorously need to study and research the subject’s essential value. For example, in the case of Sungnyemun Gate, we thought it was our job to maximize the dignity and traditional beauty of our cultural asset. At the same time, we needed to prevent the lighting from distracting passersby’s view. So we made the lighting intensity lower than the lights coming from the surroundings and focused on making shadows so the structure would seem more three-dimensional.

How do you want to light up Gangnam District?

Chung: What we are going after is grace which is exuded when something is restrained. If the lighting is too bright and glamorous, it makes the spectator think that its owner really wanted to show it off. The lighting becomes graceful when it doesn’t completely show everything the building has, but is restrained so it blends in well with the surroundings. I believe that this kind of approach conversely makes the neighborhood to stand out as a whole. I want to decorate the face of Gangnam with this thinking in mind.