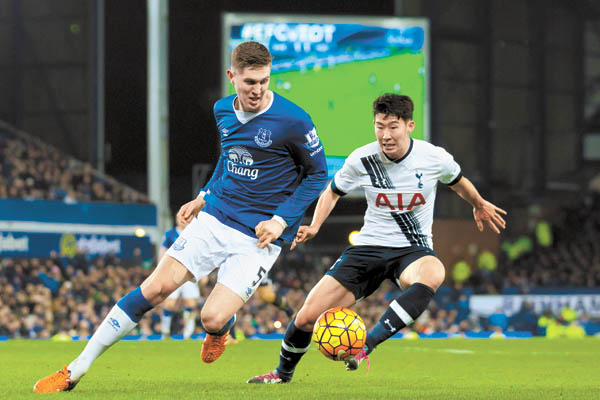 Tottenham Hotspur’s Son Heung-min, right, and Everton’s John Stones fight for the ball during their English Premier League match at Goodison Park Stadium in Liverpool, England, on Sunday. The match ended with a 1-1 draw. [AP/NEWSIS]

MANCHESTER, England - Chelsea signaled its intent to surge up the Premier League by crushing Crystal Palace 3-0 on Sunday in a stylish display that had shades of last season’s cruise to the championship.

Oscar, Willian and Diego Costa scored for Chelsea, which is out of realistic title contention following a dismal start to its defense but could still challenge for a Champions League spot on the evidence of its performance at Selhurst Park.

The champions are unbeaten in four matches under caretaker manager Guus Hiddink since firing Jose Mourinho a week before Christmas, but are still languishing in 14th place - 13 points behind fourth-place Tottenham.

Spurs lost ground in the title race by drawing 1-1 at Everton in Sunday’s other game, with Dele Alli’s superb volley earning Spurs a point after canceling out Aaron Lennon’s opener.

But Spurs’ domination at Goodison Park shows they are genuine challengers for the trophy. Only six points separate Tottenham and its north London rival Arsenal in first place, and Spurs have only lost twice all season in the league.

Tottenham ended the busy festive period with 10 points from a possible 12, more than any other side in the league.

“The way we played today, we can achieve what we want,” Tottenham manager Mauricio Pochettino said.

The belief appears to be back at Chelsea, which looks a different side to the one that struggled under Mourinho. Its attacking players are playing with more freedom, with Spain internationals Cesc Fabregas and Costa excelling against Palace.

Costa ran onto Fabregas’ through-ball, cut in and squared a pass for Oscar to sidefoot home into an empty net for the opening goal in the 29th. Willian struck a rising shot into the net from long range to make it 2-0 in the 60th and then played a part in the third goal, sending in a shot that was parried out to the feet of Costa inside the six-yard box. Costa couldn’t miss.

Alli has been one of the success stories of this season, establishing himself as a regular for Tottenham and also breaking into the England squad in his first year in the Premier League. Last season, he was playing in the third tier with MK Dons.

His goal against Everton was another example of his talent, controlling on his chest a long pass forward from Toby Alderweireld and burying a first-time volley from just inside the area in first-half injury time.

Lennon put Everton ahead against his former club in the 22nd, against the run of play. Harry Kane and Ben Davies struck shots against the goal frame either side of Lennon’s goal, as Spurs drew for the ninth time in 20 games this campaign. AP