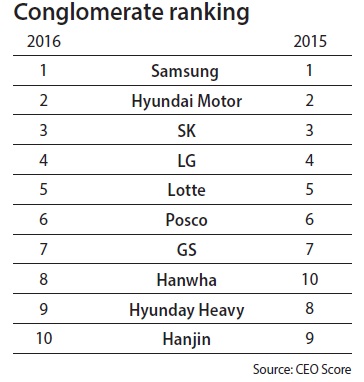 More than half of the large corporations in Korea are expected to see their ranking fluctuate in 2016 as they try to keep up the momentum from last year’s M&As and restructurings, according to CEO Score, a corporate management assessment site.

This is the first time since the 2008 global financial crisis that the Korean corporate scene will see changes on this scale.

In 2009, 33 out of 40 classified as “large companies” - with 5 trillion won ($4.2 billion) or more in asset size, according to Fair Trade Commission guidelines - had their standings adjusted.

This year, 32 of the now 49 companies are expected to see shifts.

Most notably, Hanwha is expected to step up to eighth place from 10th to outpace ailing shipbuilder Hyundai Heavy Industries and Hanjin, operator of flagship carrier Korean Air, thanks to its acquisition of four Samsung subsidiaries last year. Hanwha’s assets have grown 17.5 trillion won through the deals.

Hyundai Heavy, the world’s No. 1 shipbuilder, was hit with shrinking orders for new vessels amid slumping oil prices.

Hanjin had its corporate image tarnished after the heiress to the conglomerate made headlines around the world with her “nut rage” tantrum that delayed a Korean Air flight at the end of 2014.

Mirae Asset, a comprehensive financial group, is set to shoot to the 19th spot from 29th should it successfully acquire KDB Daewoo Securities, the country’s second-largest brokerage firm. Its assets are expected to grow from 9.9 trillion won at the end of last year to 14.6 trillion won if the deal is finalized.

Samsung, Hyundai Motor, SK, LG and Lotte will remain as the top five conglomerates, whereas Doosan ascended one step to the 11th spot and KT descended one rank to 12th.

Dongbu, which spun off its metal businesses last year as part of its corporate restructuring, slid 16 places to the 36th spot as its asset size shrank by nearly 43 percent in just a year.

Kumho Asiana, operator of Asiana Airlines, also fell three steps to 20th after it split its chemical arm and suffered tumbling revenue and profits from the aftermath of the outbreak of Middle Eastern respiratory syndrome last June.