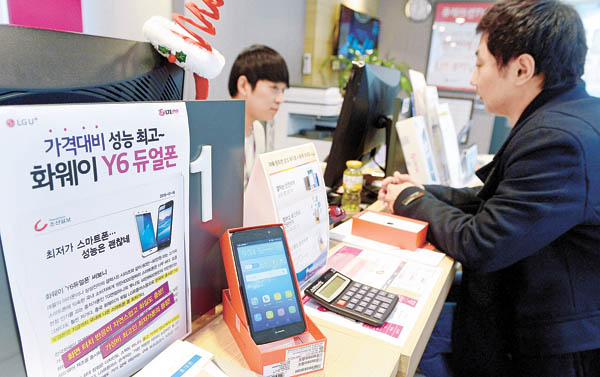 A customer asks questions about Huawei’s Y6 smartphone at an LG U+ office in Jongno District, central Seoul. The Y6 is the cheapest smartphone sold in Korea, and more than 10,000 units have been sold within 16 days of its release. [NEWSIS]

Local mobile carrier SK Telecom introduced the new Luna smartphone last year, and it has become massively popular due to its low price and specs comparable to existing mid-range offerings.

Consumer preference for smartphones that are lower in price but comparable in performance to more expensive big-name devices is expected to continue as a major trend this year.

Last month, Chinese manufacturer Huawei began distributing its Y6 smartphone in Korea through LG U+ and has since sold more than 10,000 units. Its price is only 154,000 won ($130), which is half that of other low- to mid-range smartphones that usually retail for 300,000 won and 400,000 won. Despite a price tag lower than some flip phones currently on the market, it offers top-tier features like a 5-inch HD screen, 1 gigabyte of RAM, 8 gigabytes of memory, a 360-degree panorama camera and face recognition technology. The Y6 also allows its customers to make free phone calls when connected to Wi-Fi.

Many industry insiders believe the phone is a perfect fit for younger kids or middle-aged adults who are not as familiar with smartphones, and as a result use less data. More than half of the people who bought a Y6 recently chose a monthly data plan cheaper than 30,000 won, according to LG U+.

The low- to mid-priced smartphone market has been growing in Korea as more consumers prefer reasonable prices over the manufacturer’s brand name. SK Telecom’s Luna is an example of this phenomenon. The Luna is a result of collaboration between Korea’s lesser-known IT vendor TG&Co, mobile carrier SK Telecom and Foxconn, a Taiwanese manufacturing company. The smartphone retails for 449,900 won, and over 150,000 units have been sold since last September. The Luna is the first smartphone cheaper than 500,000 won that sold more than 150,000 phones within three months of its release. The Luna was particularly popular among younger smartphone users who prioritized actual functionality and price.

But all eyes are on Chinese manufacturers, who are making some of the most sought-after options. Lenovo’s Phab Plus smartphone entered the local market last October, and Korean consumers are already buying Xiaomi’s Redmi Note 2, which hasn’t been released in Korea yet, through direct purchases from overseas. Local consumers are currently only paying about 150,000 won for the Redmi Note 2.

Much of the demand for cheaper devices stems from the Mobile Device Distribution Improvement Act that passed in October 2014, which prevented local wireless carriers from offering subsidies on expensive smartphones, often in exchange for consumers agreeing to large monthly data plans. In the absence of those subsidies, and with a slew of new data usage-based billing plans introduced last summer, consumers are now favoring more reasonably priced phones with data plans that fit their lifestyles.