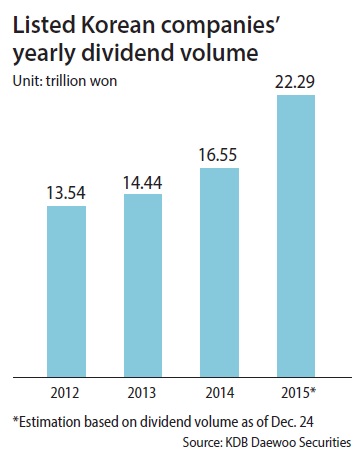 Korean companies listed on the Kospi and Kosdaq are expected to break the record for dividends paid to shareholders in 2015, a local brokerage firm said.

According to KDB Daewoo Securities on Monday, some 400 local small and large companies listed on either the benchmark Kospi or small-cap Kosdaq markets are estimated to have given out a total of 22.29 trillion won ($18.8 billion) in dividends last year. This is up 35 percent from the 16.55 trillion won in dividends distributed a year earlier.

The dividend payment made last year was the largest since the Korean stock markets opened in 1956, but it was also the second consecutive year that it broke new records.

A more accurate figure on the dividend payment will be announced after all listed companies complete its yearly account settlements in March.

Total dividend volume has steadily increased over the past few years, but the pace has gotten sharper last year thanks to the shareholder-friendly policies introduced by large-cap companies like Samsung Electronics.

After the Kospi market bellwether Samsung Electronics announced in October its decision to buy back its own treasury stocks worth 11.3 trillion won for the coming year and make dividend give-outs a quarterly event, such shareholder-friendly policies almost became a trend in the Korean securities market, with other companies also expanding dividends. SK Hynix and SK said they will raise the dividend ratio and Hyundai Motor is also reportedly reviewing expanding the dividend ratio.

Kim Sang-ho, an analyst at KDB Daewoo Securities, said such shareholder-friendly culture in Korea is only at its beginning stage especially when compared with other advanced nations like the United States, where the cash dividend volume in S&P 500 listed companies has grown 1.9 times over the past five years and their buyback volume grown more than four times during the same period.

Kim, however, anticipated that Korean conglomerates will keep expanding dividends and buybacks in the coming few years.

“The government’s aggressive taxation policies this year have put more pressure on listed companies to expand the dividends,” he said.