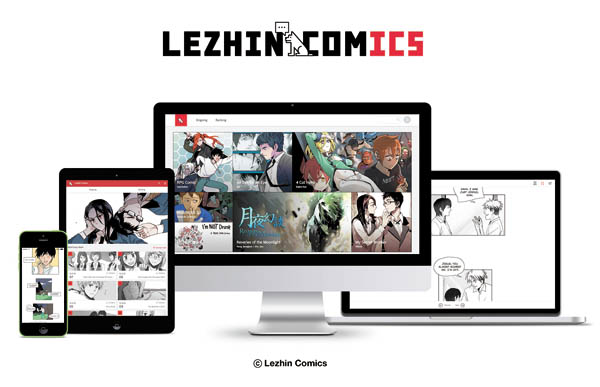 Backed by the craze for Internet-based comic strips, or webtoons, at home, platform operators are bringing their entertaining content to a wider base of comics lovers outside the country.

The company said on Monday that it now offers English translations of 12 web comics provided by contracted authors on its site.

“With the entry into the United States, Lezhin will have a significant base to provide its service to the market with the largest number of consumers in the entertainment field,” Lezhin CEO Han Hee-sung said.

Lezhin will launch a U.S.-based office next month to better serve readers in the country.

The number of translated comics will gradually increase to over 40 by the first half of this year, according to a statement released by the company.

The genre of the digital cartoons available now ranges from romance and fantasy to mystery and comedy. The released works include “Matchstick 20,” “4 Cut Hero” and “I’m Not Drunk,” a selection that Lezhin expects to fit the interests of U.S. readers.

Most of the works will cost money to view, as it is the case for local subscribers. While big portal sites Naver and Daum provide webtoons for free, many of Lezhin’s comics charge fees per episode.

The content operator sees the United States as an ideal market to enter since the country has a large base of content consumers and avid comic fans. The company also added that U.S. consumers are more used to paid subscription services.

The United States is the second overseas market Lezhin has pursued, following its entry into Japan last July.

Established in 2013, Lezhin had humble beginnings with fewer than 10 workers, but it has since grown into a leading webtoon platform service provider, competing with portal giants Naver and Daum.

Lezhin posted annual sales of 10 billion won ($8.4 million) in 2014 with seven million subscribers, a year after its inception.

The remarkable feat came as the webtoon market has been enjoying strong growth.

Korea’s webtoon market is valued at around 420 billion won, according to Digieco, a research institute specializing in technology trends.

The institute run by the carrier KT forecast that the market size will surge to 880 billion won by 2018.

To expand in the global market, other providers are also looking abroad. Naver, the biggest webtoon platform, launched a service called Line Webtoon to provide English versions of its comics.

Although Western countries also have web-based comics, Korea’s webtoon culture is distinguished by its quality. The reason is partly attributed to the fact that most artists and authors create webtoons as their primary jobs.

The genre originated in 2003 when Daum introduced serial digital comics on its website.

The market is currently dominated by the two portals and Lezhin. As of July 2014, Naver had published 520 webtoons while Daum had published 434.