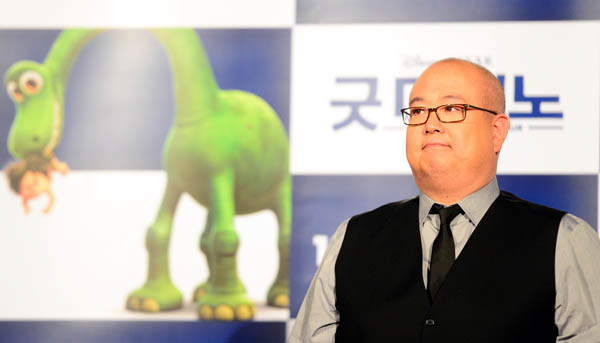 Korean-American director Peter Sohn talks about his upcoming feature debut, “The Good Dinosaur,” during a press conference on Monday at the COEX Megabox in southern Seoul. [NEWSIS]

Peter Sohn, the first Korean-American director at Disney-Pixar, recently revealed the path he followed to directing his first animated feature, “The Good Dinosaur,” at a promotional event in Seoul.

This 16th project from Disney-Pixar, which opens nationwide on Thursday, is a heartwarming adventure story of a timid herbivore named Arlo and an untamed cave boy named Spot, who form an unlikely companionship and look after each other in the dangerous wild.

“I didn’t become an animation director like other Hollywood directors,” Sohn said at the event on Monday, accompanied by animator Kim Jae-hyung and producer Denise Ream.

The 38-year-old Sohn, who was born to a Korean immigrant family, grew up in New York until college, nurturing his dream of working in the animation business ever since he saw his mother shedding tears while watching Disney’s 1941 classic “Dumbo,” even though she couldn’t understand the words. 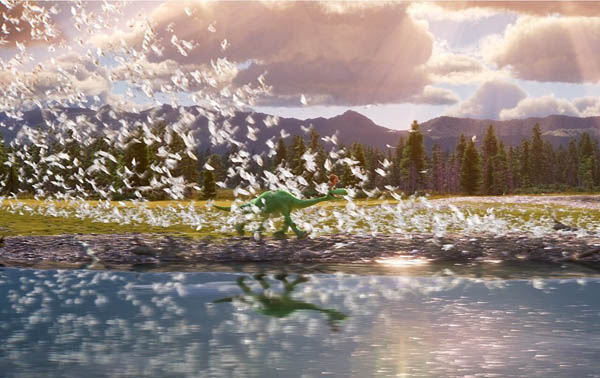 The animated movie about a boy and a dinosaur opens nationwide on Thursday. [DISNEY-PIXAR]

He started his career at Pixar 15 years ago as an animator and experienced many departments, animating for films like “Ratatouille” (2007) and “The Incredibles” (2004), as well as working as a voice actor and story artist.

“But the most important thing for me [as an animation director] is seeing your point of view and your observations, opinions and tastes,” Sohn said. “When you are creating something, whatever it is, if it is coming from you, that’s what is important.

“What we always look for is what this person can bring to the team.”

Another Korean on “The Good Dinosaur” team, animator Kim left behind a stable life as a medical doctor and joined Pixar. He has worked on projects like “Inside Out” (2015), “Monsters University” (2013) and more.

Kim said he decided to pursue a career as an animator in hopes of doing something he actually enjoys.

“He had a sensitive style, but he could also do others,” Sohn said of Kim’s animation style. “There was a moment where Spot uses Arlo as a bridge and that was a really funny moment, but he could do very intense moments like where Arlo and Spot fall into the river.”

Although it may not be apparent to the audience, the production team had many difficulties when making the ambitious dinosaur animation, since a majority of the movie takes place outdoors and lacks much dialogue to explain the story.

To overcome the latter obstacle, Kim focused on “making the facial expressions and gestures clearer and more accurate” to convey the emotions that would otherwise be said through words.

And the team tackled the challenge of creating an outdoor setting by conducting a field study in western parts of the United States, in Wyoming and Montana, to capture the landscape and reproduce it on the big screen using the computer-generated images.

“We tried to infuse emotional context into the nature,” Sohn said. “The whimsy and mystery of how our characters would see the world was something we really fought for in the movie.”